After making the western masterpiece Fort Apache (1948), director John Ford returned to the religious overtones of the movie he made right before Fort Apache, The Fugitive (1947).

3 Godfathers reimagines the biblical story of the three wise men as a story of three bank robbers from Texas who are fleeing a U.S. Marshal in the Arizona Territory.

Unlike Ford’s previous several black & white films, 3 Godfathers is shot in Technicolor. It’s dedicated to the memory of Harry Carey, “Bright Star of the early western sky.” (Carey acted in dozens of Ford’s early films, and died on September 21, 1947.)

I put “introduces” in quotation marks because he’d already had credited roles in several films, including Pursued (1947), Red River (1948), and Moonrise (1948).

The three bank robbers are named Robert Marmaduke Hightower (John Wayne), William Kearney, a.k.a. “The Abilene Kid” (Harry Carey, Jr.), and Pedro “Pete” Roca Fuerte (Pedro Armendáriz). John Wayne’s drinking buddy, Ward Bond, plays the U.S. Marshal who pursues Robert, William, and Pedro after they rob a bank. Bond’s character is named Perley “Buck” Sweet, or “B. Sweet,” a name Robert finds hilarious. Marshal Sweet’s bearlike body and easygoing nature belie his craftiness. When he first pursues the bank robbers, he shoots a hole in their waterskin, then he sets up camp with his deputies at the spot he thinks they’ll have to circle back to in order to get water. 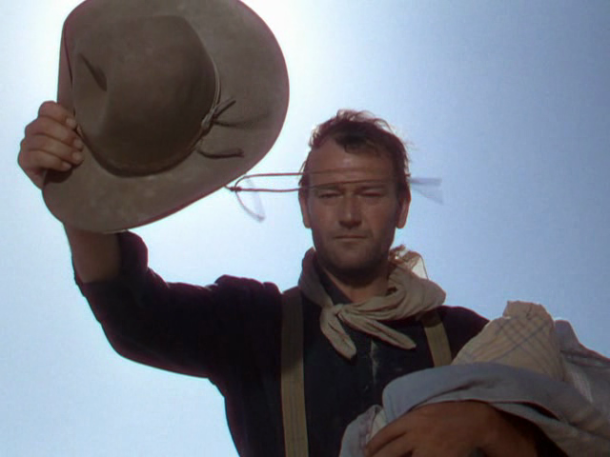 Wandering through the desert, the three bank robbers find a dying woman (Mildred Natwick), who has just given birth to a baby. She tells them that they will be the boy’s godfathers, and she names her baby after the three of them — Robert William Pedro.

The following section of the film is sort of like a religious version of Three Men and a Baby in the Old West, as the trio of roughnecks try to figure out how to care for a baby in sometimes hilarious ways. When they finally rig up a nursing device and fill the bottle with milk, John Wayne laughs and says, “Boy, he hops to it like a drunkard at a Fourth of July barbecue.”

There are tender moments, too, like the one in which Carey holds the baby and sings “Streets of Laredo” in a beautiful baritone.

The religious aspects of the story are fairly explicit. The three godfathers follow a bright star in the sky toward the town of New Jerusalem, and they do so to the musical strains of “Away in a Manger” as the desert sands blow over the large wooden cross they’ve placed over the baby’s mother’s grave. They also use Bible verses as guides and portents in their journey.

I’ll admit that John Ford’s appeal sometimes eludes me. I’m not nearly as in love with some of his masterpieces as others are. But while 3 Godfathers will probably never be counted as one of Ford’s masterpieces, I thought it was a well-crafted, emotionally satisfying film. It’s also the perfect choice if you love westerns and are looking for a good movie to watch around Christmas with your family.