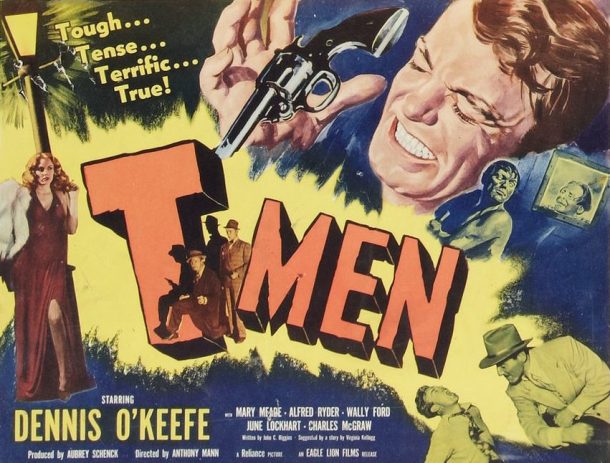 Anthony Mann’s T-Men sneaks up on you like a sap-wielding mug in a dark alley.

For the first 10 minutes or so, it seems like just another docudrama about the heroic exploits of undercover government agents — like Henry Hathaway’s films The House on 92nd Street (1945) and 13 Rue Madeleine (1947) — right down to the stentorian voice-over narration by Reed Hadley, the guy who always did the stentorian narration in patriotic docudramas.

The title and opening credits of the film appear superimposed over the Seal of the United States Department of the Treasury as triumphant music plays. Then a disclaimer appears explaining that all the U.S. currency in the film was reproduced with special permission of the Treasury Department, and that reproduction of said currency is strictly prohibited. (Don’t film yourself fanning out a bunch of sawbucks at home, kids!)

Then the former chief coordinator of the law enforcement agencies of the Treasury Department, Elmer Lincoln Irey, haltingly reads from a piece of paper and explains the six units of the Treasury Department: “The Intelligence Unit, which tracks down income tax violators, the Customs Agency Service, with the border patrol, which fights smuggling, the Narcotics Unit, the Secret Service, which guards the president and ferrets out counterfeiters, the Alcohol Tax unit, which uncovers bootleggers, and the Coast Guard. These are the six fingers of the Treasury Department fist. And that fist hits fair, but hard.” (Incidentally, the mild-looking, bespectacled Irey was one of the men who brought down Capone. He also worked on the Lindbergh kidnapping case.)

Irey goes on to say that what we’re about to see is called “The Shanghai Paper Case,” a composite of actual counterfeiting cases tackled by the Treasury Department.

Over the course of the first couple of reels, however, it becomes clear that T-Men is a very different film from The House on 92nd Street, and that its dry, fact-filled introduction is only the tip of the iceberg. 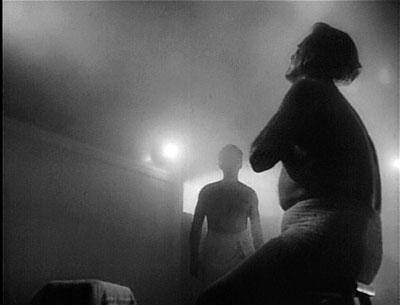 Although Reed Hadley’s hokey narration occasionally dominates the proceedings, the script is tight and the actors are all excellent. Dennis O’Keefe and Alfred Ryder, who play undercover treasury agents Dennis O’Brien and Tony Genaro, are solidly believable, and Wallace Ford — who plays “The Schemer” — is always fun to watch, but for my money, the most memorable character in the film is “Moxie,” played by the granite-jawed Charles McGraw. Moxie is a merciless thug who shoots men dead without blinking, breaks fingers as easily as he asks questions, and boils a man to death in a steam bath without changing his expression.

But it’s not just the sudden, brutal acts of violence or the sense of paranoia that suffuses T-Men that set it apart from other films of its ilk, it’s also the dimly lit, “you are there” cinematography by John Alton.

Director Mann and the studio had faith in Alton, and pretty much let him do whatever he wanted. Alton, quoted in the press book for T-Men,* said “…we shot scenes just as they came along. We shot under all conditions. Some of our night shots were made without any lights at all. I know some people thought the scenes wouldn’t match and it would turn out to be a horrible mess. Fortunately, it turned out as I was sure it would.”

Alton and Mann’s contribution to what we now call “film noir” is enormous. T-Men is a great picture. It’s tense, violent, and looks amazing. Despite its low budget, it was a big hit when it was released, and it’s still fresh today.

*And cribbed by yours truly from Alan K. Rode’s fantastic book Charles McGraw: Biography of a Film Noir Tough Guy.