If you think that Mexico-U.S. border security and illegal immigration are relatively new issues, check out Anthony Mann’s Border Incident. Watching it today, it’s remarkable how familiar the social and political backdrop feels.

Border Incident is a fictional film, but it’s a composite of actual cases. It begins with the stentorian narration that opened nearly every docudrama from the 1940s, and explains how important migrant labor from Mexico is to the U.S. agricultural industry. The narrator goes on to say that while the vast majority of Mexican farm workers play by the rules, wait their turn, and arrive in the United States with working papers, some go through back channels and slip across the border in order to work illegally.

The police officers on the front line of the operation are Pablo Rodriguez (Ricardo Montalban) and Jack Bearnes (George Murphy). Pablo and Jack have worked together before and have an easy friendship, but they don’t get much time together onscreen in Border Incident.

Jack goes undercover as an American fugitive looking to flee the country and cozies up to the vicious leader of the gang who are robbing and killing illegal immigrants. The gang’s leader is named Owen Parkson and he’s played with understated relish by dependable heavy Howard Da Silva. (And speaking of dependable heavies, the great Charles McGraw is also on hand as one of Parkson’s lieutenants.)

Meanwhile, Pablo goes undercover as a migrant laborer looking to put himself at the mercy of the human traffickers who transport desperate men in dangerous and cramped conditions. Will his soft hands give him away? You’ll just have to watch the movie to find out. 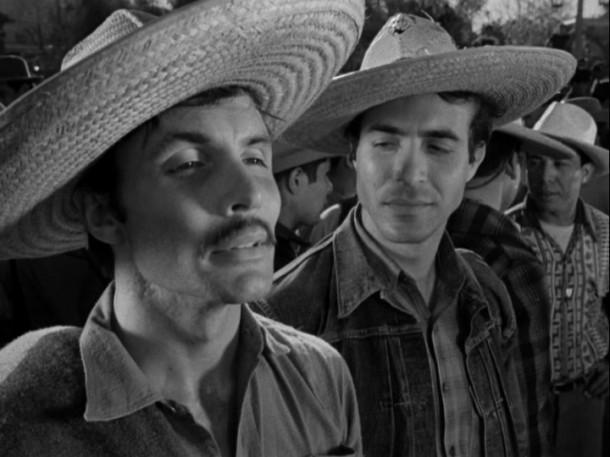 Border Incident was one of the last films Anthony Mann made with cinematographer John Alton. Earlier in their careers, Mann and Alton made two of the most visually innovative noirs of all time; T-Men (1947) and Raw Deal (1948).

I didn’t find Border Incident quite as involving as either T-Men or Raw Deal, but visually it’s every bit the equal of those films, maybe even better. It’s full of deep-focus photography that frames two people’s faces — one in the foreground and one in the background — in a way that dials up the tension and paranoia. Day-for-night shooting rarely looks good, but Alton makes it work in Border Incident, which is replete with stunning desert landscapes that are dominated by jagged mountains and that have a sense of claustrophobia despite taking place outdoors.

While Border Incident doesn’t have any of the “We don’t need no steenking batches” types of Mexican caricatures, aside from Montalban’s protagonist, the Mexican characters don’t have much depth. And it’s odd that a film with so much authenticity would cast an Anglo actor, James Mitchell, as the second most prominent Mexican character. (If you’re a fan of soap operas, you might know Mitchell as Palmer Cortlandt on All My Children.)

Minor quibbles aside, however, Border Incident is a top-notch entry in the film noir docudrama genre. It’s a tough, tense, violent film that features extremely impressive cinematography and continually mounting tension. It also made me wonder what Orson Welles’s masterpiece Touch of Evil (1958) would have been like if Ricardo Montalban (an actual Mexican) had been cast in the lead role instead of Charlton Heston (a fake Mexican).