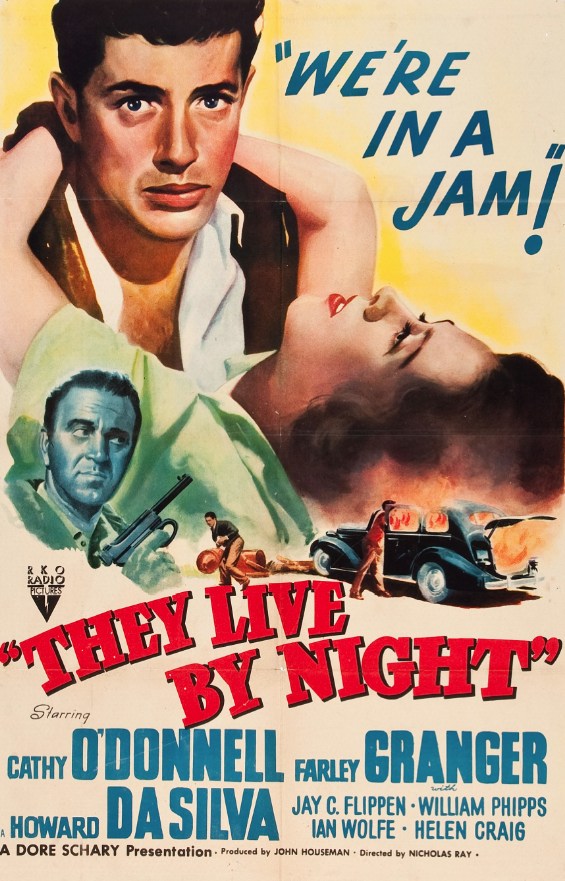 This movie grabbed me with its first frame and never let go.

They Live by Night is unlike any other movie I’ve seen so far from 1948. Obviously I know what lay ahead for its director, Nicholas Ray, but even if I didn’t, this is the kind of film that would make me sit up and take notice of his name, and look forward to seeing everything he directed next.

Come to think of it, my knowledge of Ray’s filmography is pretty spotty. In high school, Rebel Without a Cause (1955) was one of my favorite films. I watched it over and over, but never thought to explore more of Ray’s films. Years later, I saw In a Lonely Place (1950) and loved it, but didn’t make the connection that it was the same director who made Rebel. But now I’ve got so many Nicholas Ray films to look forward to!

Like all innovative films made more than 50 years ago, They Live by Night doesn’t contain anything we haven’t seen in hundreds of films since, but when viewed in its proper context, it’s exhilarating. Just look at the opening of the film. Unlike nearly every other film of the era that began with a title card followed by a credit roll, They Live by Night begins with shot of two deliriously happy young lovers as the following words flash on the screen: “This boy… and this girl… were never properly introduced to the world we live in… To tell their story…” And suddenly the music becomes grim and portentous, we cut to a shot of a speeding car, and the film’s title appears. The speeding car is filmed from a helicopter, and it’s the earliest instance of action shot from a helicopter that I’ve seen in a film. It’s just one of the innovative ways that Ray creates tension, drama, and excitement with filmmaking techniques that are common practice now, but that were revolutionary at the time.

They Live by Night was based on Edward Anderson’s novel Thieves Like Us (1937). Farley Granger plays a young man named “Bowie” Bowers (his first name is pronounced “Boo-ee,” just like Jim Bowie). When the film begins, he’s an escaped con running from a murder sentence, and his luck will only get worse as the film goes on.

Except for one thing. He falls in love with a young woman named Keechie (Cathy O’Donnell), and while they’re on the run together, they’re happy as only two young people in love can be happy.

There are obvious comparisons to be drawn with Joseph H. Lewis’s Gun Crazy (1950) and Arthur Penn’s Bonnie and Clyde (1967). They Live by Night shares the Depression-era setting with Bonnie and Clyde, and it’s visually similar to Gun Crazy, but unlike both of those films, Keechie isn’t an active participant in any criminal activity and the film focuses more on her romance with Bowie than it does on Bowie’s crime spree.

Ray makes so many surprising and smart choices in this film. He doesn’t show most of Bowie’s bank robberies, which focuses our attention on Bowie’s romance with Keechie. His crime spree across Texas is a matter of grim necessity, and all he wants to do is escape. This has the effect of making a radio news report about Bowie’s growing infamy surprising to the audience. Ray makes it easy to forget much of the time that Bowie is a criminal, which make the intrusions of hard reality into Bowie and Keechie’s lives all the more shocking.

Ray also has a knack for depicting life in a way that feels authentic. Even minor characters with just a few lines feel like fully realized, three-dimensional people. When Bowie and Keechie go to a nightclub on a date, the African-American singer Marie Bryant does a rendition of “Your Red Wagon” and collects dollar tips from the crowd, which she folds and clasps between her fingers. Most Hollywood productions would never show a nightclub singer taking tips — it would ruin the illusion of glamour. But the nightclub in They Live by Night looks and feels like a real place. When Bowie goes into the men’s room, he has a brief conversation with the African-American bathroom attendant. In a lesser film, the attendant would be comic relief, and in a lower-budget film, he wouldn’t exist at all.

They Live by Night features top-notch work by all of its cast and crew. Leigh Harline’s music (with uncredited assistance from Woody Guthrie) is phenomenal. George E. Diskant’s cinematography is some of the most beautiful and most noirish I’ve ever seen (they really do live by night in this movie), and Sherman Todd’s film editing is soothing when it needs to be and jarring when it needs to be. Todd and Ray made a lot of risky choices in the editing room, but for my money, they all paid off.

Ray filmed They Live by Night in 1947, but RKO wasn’t sure how to market the film, and it ended up premiering in the United Kingdom in a single theater on August 5, 1948. It wasn’t released in the United States until November 1949, and didn’t end up being a financial success, but it had been screened privately in Hollywood for many actors and producers, which led to Ray’s next film, Knock on Any Door (1949), with Humphrey Bogart, as well as to Farley Granger being cast in Alfred Hitchcock’s Rope (1948).