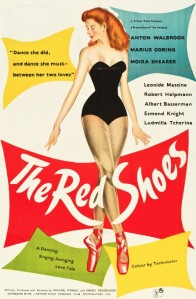 Michael Powell and Emeric Pressburger’s The Red Shoes was inspired by Hans Christian Andersen’s 19th-century fairy tale about a girl who can’t stop dancing after she puts on a pair of magical red shoes. An angel appears and tells her she will continue to dance after death as a warning to vain children everywhere. Her feet keep dancing in the red shoes even after they are amputated.

It’s a potentially wonderful parable for the way ballet dancers suffer for their art, but as a cinematic experience, The Red Shoes left me wanting. I’ve been hearing for most of my life about how wonderful this film is, but for me it was the most disappointing production from Powell and Pressburger that I’ve seen so far.

That’s not to say that I didn’t like it, but I had very high expectations, and I felt let down.

In terms of Powell and Pressburger’s filmography, The Red Shoes lacks the warm, human drama of I Know Where I’m Going (1945) and the sublime comedy of a film like A Matter of Life and Death (1946). It’s most similar to Black Narcissus (1947), in which lush visuals eroticized a slight story.

The Red Shoes is beautiful to look at, and the dancing is marvelous, but the story never completely captured my interest, and I found the performances of the actors campy and overblown.

The intense, youthful-looking 51-year-old Austrian actor Anton Walbrook plays composer and ballet impresario Boris Lermontov, the head of the Ballet Lermontov. For him, dance is a religion, and when Lady Neston (Irene Brown) tries to get him to watch her niece dance at a party, he witheringly replies that he doesn’t care to see his religion practiced “in an atmosphere such as this.”

Her niece has real talent, however, and she soon becomes one of Lermontov’s principal dancers. Her name is Victoria Page (“Vicky” for short), and she’s played by the beautiful red-haired ballerina Moira Shearer. 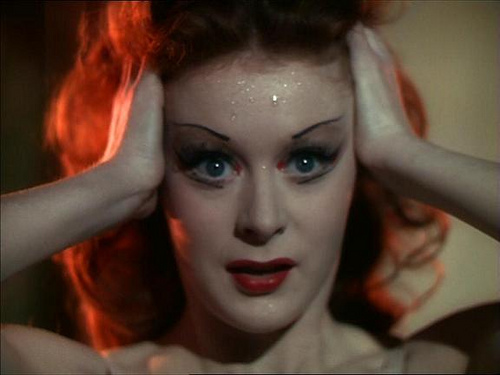 Powell and Pressburger wisely chose to cast real ballet dancers who could act a little, rather than actors who could do a little ballet. For the most part it works, but except for Shearer — whose performance in The Red Shoes I find quite wonderful — the ballet dancers don’t have a lot of range as actors.

When there’s no dancing going on in The Red Shoes, things feel a little lifeless. The film is ostensibly about Vicky being torn between her love for the “attractive brute” Lermontov and her love for the young composer Julian Craster (Marius Goring), whose creativity is burgeoning as Lermontov’s is failing. I never felt compelled by either of these relationships, however, and it didn’t help that I found Goring utterly devoid of charisma. It also doesn’t help that this plot device kicks in too late in the film to feel authentic.

The Red Shoes is a visual feast with some wonderful ballet sequences, but dramatically, I found it sodden and overlong.