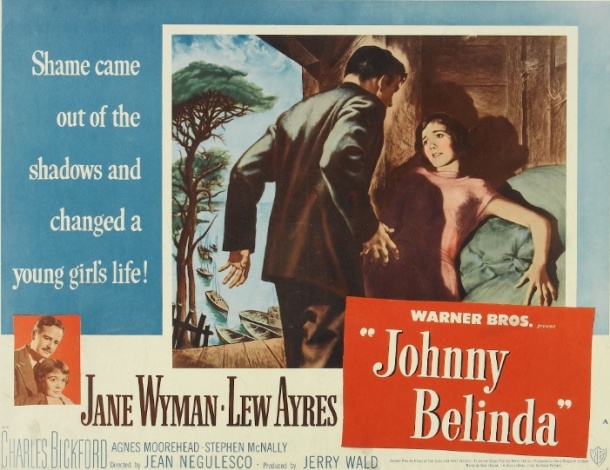 Jean Negulesco’s acclaimed film Johnny Belinda stars Jane Wyman as a deaf-mute girl named Belinda McDonald who lives on the island of Cape Breton in Nova Scotia. Wyman was awarded an Oscar for her performance at the 21st Academy Awards on March 24, 1949.

Johnny Belinda is based on Elmer Blaney Harris’s play of the same name. Harris was 62 years old when Johnny Belinda opened on Broadway in 1940. He was a busy man, and by that point in his career he had many plays, films, and screenplays under his belt. Even so, it can’t have been easy for him when the play was savaged by critics. Richard Watts of the New York Herald Tribune dismissed Johnny Belinda as “cheap melodrama” that was full of “shameless sentimentality.” Brooks Atkinson, drama critic for the New York Times, was even less kind when he wrote the following:

Now that Johnny Belinda has reached the stage, there may not be enough drama left to last through the rest of the season. Elmer Harris has shot the works in one evening at the Belasco Theatre. The mortgage is in it; also seduction, childbirth, death by lightning, murder by shotgun, a snowstorm, a Canadian Mounted in scarlet uniform and a court room scene. As minor diversions Mr. Harris throws in a lesson on grinding grain on a water wheel and a scene with a spinning wheel. Being a thorough workman, he also includes the kitchen stove and the kitchen sink.

I’ve never seen the stage play version Johnny Belinda, so I can’t say how sensationalistic or melodramatic it is, but Negulesco’s film version is an excellent piece of work. He took controversial material that could have easily become histrionic twaddle in the hands of a lesser director and used it to craft a deeply affecting movie.

Much of the success of Johnny Belinda is due to its actors. Wyman deservedly won the Academy Award for Best Actress for her role as Belinda, beating out Irene Dunne in I Remember Mama, Barbara Stanwyck in Sorry, Wrong Number, Ingrid Bergman in Joan of Arc, and Olivia de Havilland in The Snake Pit.

Johnny Belinda received 12 Academy Award nominations — the most of any film in 1948 — but it only took home one Oscar; Wyman’s award for best actress. I think Johnny Belinda is an excellent, well-acted film. My only reservation about it is the use of a dummy in a murder scene that is one of the most egregiously awful things I’ve ever seen. If you can overlook that (and I can … mostly) and accept that its treatment of its themes are of its time and place, then Johnny Belinda is a film worth seeking out.