Joan of Arc was always a force to be reckoned with.

In life, she had heavenly visions, led the French army to several victories against the English during the Hundred Years’ War, paved the way for Charles VII to become King of France, and was tried for heresy and burned at the stake in 1431. When she died, she was only 19 years old.

In death, she exerted a powerful influence over the imaginations of artists and writers. From Shakespeare’s largely unflattering portrayal in Henry VI, Part 1 to Mark Twain’s largely forgotten historical novel Personal Recollections of Joan of Arc, the Maid of Orléans was a devil to some, and a saint to others.

Over time, the English decided to stop caring so much, and she came to be seen by more and more people as a holy figure. In 1920 the Catholic Church decided to make it official, and canonized her, which reignited interest in her life. Her trial for heresy, which was held in 15 sessions from February 21 to March 17, 1431, was exhaustively recorded. Most fictional portrayals of Joan of Arc, like George Bernard Shaw’s play Saint Joan (1923), drew from these official records.

Maxwell Anderson’s play Joan of Lorraine opened on Broadway on November 18, 1946, and played for 199 performances at the Alvin Theatre. The last performance was on May 10, 1947. The original production starred Ingrid Bergman as Mary Grey, an actress playing Joan of Arc who struggles with her director, Jimmy Masters (played by Sam Wanamaker), over how Joan should be portrayed.

Joan of Lorraine was the basis for the 1948 film Joan of Arc, which also stars Ingrid Bergman, but the “play within a play” concept was jettisoned in favor of straight historical drama. Much of Anderson’s original dialogue was retained, however, with additional scripting and added characters by Andrew Solt. 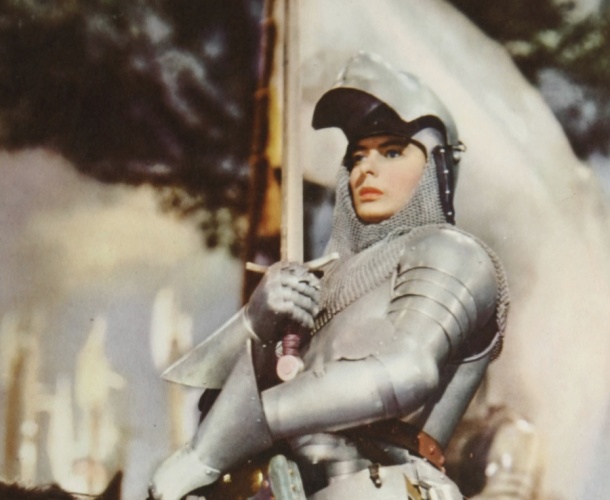 Joan of Arc was the last film that Victor Fleming directed. The man who directed The Wizard of Oz (1939) and Gone With the Wind (1939), as well as many other memorable films, died of a heart attack on January 6, 1949. He was 59 years old. While it might not be as fondly remembered as some of his other films, it’s still a pretty good one to go out on. It’s a big, sprawling, Technicolor costume drama (although there is a cut version that is just 1 hour and 40 minutes, the original cut of the film is 2 hours and 25 minutes long). Most importantly, Joan of Arc features a brilliant lead performance by Bergman. Most of the other actors are pretty good, especially José Ferrer (in his first film role) as the Dauphin, later Charles VII. With a cast of thousands, however, there are bound to be a few duds, and there are, although Ward Bond, whom I more closely associate with westerns than European historical dramas, was better than I was expecting. John Ireland? Not so much.

Joan of Arc is also heavy on dialogue and light on spectacle. With the film looks great, there’s only one big battle scene, and it doesn’t come close to matching similar scenes that Fleming directed for Gone With the Wind. While Joan of Arc is by no means a bad film, without Bergman’s performance it would lose most of its impact.

It’s certainly worth seeing, but if you’re only going to see one film about Joan of Arc in your lifetime, it should be Carl Theodor Dreyer’s silent film The Passion of Joan of Arc (1928), which stars Maria Falconetti in one of the most hypnotic film performances of all time. With spare sets and simple costumes, Dreyer achieves effects Fleming could only dream of. Falconetti’s performance in The Passion of Joan of Arc walks the fine line between madness and mysticism. Religious faith is a tricky thing to depict on film, but Dreyer’s film is one of the few that gets it exactly right.

The fiery finale of Fleming’s Joan of Arc is powerful, too. And as far as visual depictions of religious martyrdom go, I think both films are more powerful statements than the geek-show excesses of The Passion of the Christ (2004).