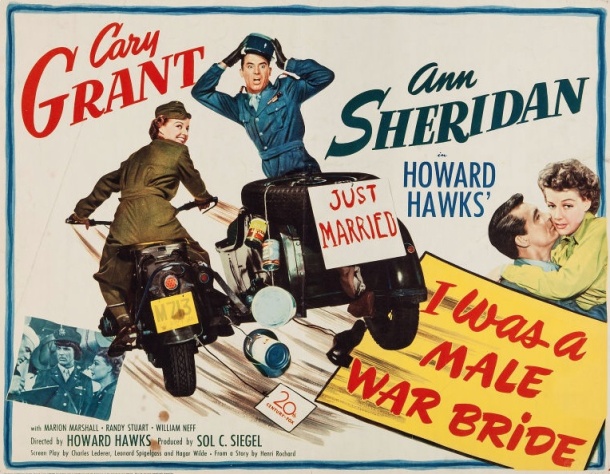 Here’s what I knew about I Was a Male War Bride before I watched it: It’s a screwball comedy directed by Howard Hawks. It’s the only Howard Hawks movie my cinephile friend Oskar doesn’t like very much. Cary Grant dresses in drag at the end.

Beyond that, I went in with no preconceptions, and I had a great time. I laughed more at I Was a Male War Bride than any comedy I’ve watched in the past few months.

I’m sure it’s hard for a lot of people not to unfavorably compare I Was a Male War Bride with Howard Hawks’s two previous screwball comedies with Cary Grant, Bringing Up Baby (1938) and His Girl Friday (1940). Both films are widely acknowledged classics. Taken on its own merits, though, I think I Was a Male War Bride is great. It’s a really funny movie, with a wonderful blend of witty dialogue and physical comedy.

Capt. Rochard is an incorrigible skirt-chaser and Lt. Gates is a hard-nosed officer with a quick wit. When the film begins, they’ve already been paired on multiple missions, and have the easy romantic-comedy repartee of two bickering people who profess to hate each other but can’t get enough of each other.

The opening scene of the film mocks the military’s obsessive use of acronyms and initialisms, when Capt. Rochard is so caught up in making sense of abbreviations that he can’t decipher the door of the women’s lavatory. And the film as a whole mocks the endless layers of bureaucracy and red tape everyone in the military has to contend with.

I Was a Male War Bride is based on the memoirs of the real-life Henri Rochard, a Belgian who married an American Army nurse, which were published under the humorously verbose title I Was an Alien Spouse of Female Military Personnel Enroute to the United States Under Public Law 271 of the Congress.

There’s a lot I loved about this film. It’s laugh-out-loud funny, with great gags and crisp dialogue that is frequently sexually suggestive, and Cary Grant and Ann Sheridan have wonderful chemistry.

My one problem with the film was that I could never accept Cary Grant as a Frenchman. Cary Grant is one of the all-time great screen stars, but he had two speeds: Comedy and Drama. He never altered his accent and barely ever changed his mannerisms. I wouldn’t have had trouble accepting him as a “French” military officer if it wasn’t so inextricably linked to the film’s plot. The film has a good deal of authenticity. Much of it was shot in Germany, and a lot of the throwaway dialogue is in German, so the fact that Grant doesn’t look French, doesn’t act French, and never speaks in French is really bizarre.

On the other hand, Cary Grant is perfect for this type of comedy, and I don’t think I Was a Male War Bride would have been a better film if his role had been played by Jean Gabin or Jacques François.

The final sequence with Grant in drag didn’t play as humorously for me as it probably did when the film first played in theaters. Seeing a popular male star dressed as a woman isn’t a novelty anymore, after movies like Tootsie (1982) and The Birdcage (1996). And this certainly wasn’t the first movie to feature a man in drag, as anyone who’s seen The Devil-Doll (1936) can attest.

But the scenes of him in drag take up a blessedly short amount of screen time, and didn’t diminish the overall good time I had watching this film. It’s a great comedy with great stars, and holds up really well. It was also 20th Century-Fox’s highest-grossing movie of 1949, and Howard Hawks’s third most financially successful film of all time, after Sergeant York (1941) and Red River (1948).