With those words we are plunged into the dark, unforgiving world of Caged, a masterpiece of the women-in-prison genre from director John Cromwell.

Caged is a tough, tragic, and intelligent film; it’s hell and gone from the cheap, lurid flicks that would define the women-in-prison genre during the exploitation heyday of the 1960s and ’70s.

Not only is Caged a great drama, it’s also a feminist film. Some of the prisoners in Caged are victims of abusive husbands, many of them were forced into a life of crime by their husbands or boyfriends, and all of them are subject to a justice system run by men. Even the woman with the most power in the film, the reform-minded warden Ruth Benton (Agnes Moorehead), has to answer to the governor and his officious underlings.

Like most prison movies, Caged focuses on a first-time offender, or “fish,” who’s new behind bars and has to learn the ropes. Her name is Marie Allen (Eleanor Parker), and she’s serving time for driving the getaway car for her young husband, who was killed during the commission of a robbery that netted a mere $40. “Five bucks less and it wouldn’t be a felony,” says the woman in the prison office who types up Marie Allen’s intake forms. (The arbitrary and sometimes brutally unfair nature of the criminal justice system is a theme that runs through the film.) 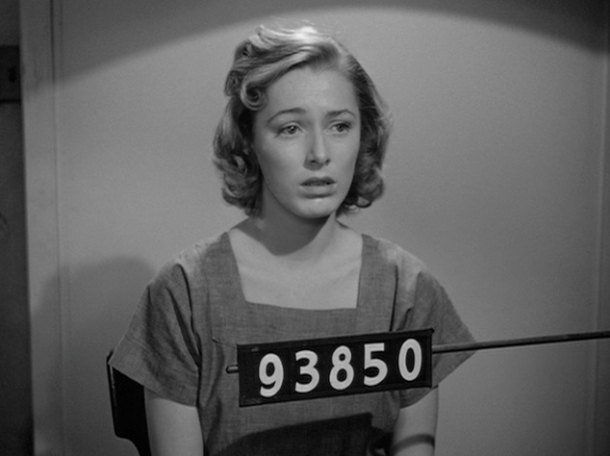 Caged wasn’t the first movie to feature scenes in a women’s prison, but as far as I can tell, it was the first women-in-prison film to take place pretty much completely behind bars.

There were movies in the pre-code 1930s that featured scenes behind bars in women’s prisons. And about a year before Caged was released, Crane Wilbur’s The Story of Molly X (1949) proudly boasted that its prison sequences were filmed in a real women’s correctional facility. But the prison sequences in The Story of Molly X were a relatively small part of the whole film, and were the kind of violent and lurid exploitation most people normally think of when they hear the words “women in prison.”

Caged, on the other hand, is a great film with great performances. It’s a tragic story about a young woman who barely needed rehabilitation in the first place, and yet has everything systemically taken from her until she is a hardened criminal with nothing but criminality to look forward to when she’s released.

There are plenty of filmed women-in-prison stories that I’ve enjoyed, but I honestly can’t think of a smarter or more affecting one than Caged until the Netflix series Orange Is the New Black came around in 2013. However, I haven’t yet seen So Young So Bad, which was released in theaters one day after Caged. It’s the next film I’ll review, and we’ll see how it stacks up.