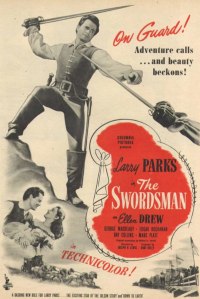 Joseph H. Lewis’s Technicolor spectacle The Swordsman takes place in the Scottish highlands toward the end of the 17th century. Clan warfare is what the highlanders live and breathe, and no clan war is as bitter as the one between the MacArdens and the Glowans.

So when Alexander MacArden (Larry Parks) falls into the skirts of the beautiful Barbara Glowan (Ellen Drew) after leaping onto her moving coach (as swashbuckling heroes in Technicolor spectacles are wont to do) he naturally tells her his name is “Duncan Fraser.”

This little deception allows him to go “undercover” amongst the Glowans along with his rotund, Falstaffian sidekick Angus MacArden (Edgar Buchanan).

After the obligatory sequence of highland games (including a javelin throwing competition that I’m not sure is culturally accurate as well as a “walk the greased plank to grab a caged piglet” competition that you probably won’t be seeing at your local highland games anytime soon), Alexander is found out by the Glowans and has to flee. 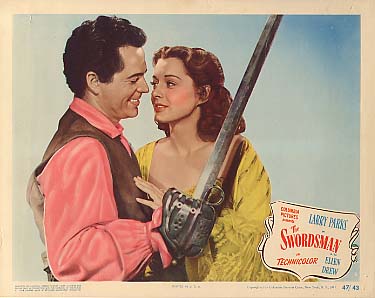 The rest of the film is a well-paced and exciting adventure story. Alexander and Barbara’s star-crossed love suffers the predictable travails, but I liked that there were few contrived misunderstandings between the two.

Alexander attempts to broker peace between the Glowans and the MacArden, and there’s nothing like a marriage to do it.

But restive elements in both clans work against a truce, and there’s plenty of double-dealing and murder afoot.

Wilfred H. Petitt’s script doesn’t always jibe with what we see on screen. For all the talk of “claymores” I never saw one of those fearsome two-handed Scottish long swords, only rapiers.

Larry Parks will never be mistaken for swashbuckling superstars like Errol Flynn or Tyrone Power, but at this point I can’t remember the last swashbuckling film Flynn made, and while I love Power, there’s no question that The Swordsman contains more thrills per minute than the ambitious but flawed Captain From Castile (1947).

The Swordsman is a really fun adventure picture. The pacing of the film is excellent, and Hugo Friedhofer’s score is rousing and exciting. I wasn’t bored for a single moment of the film’s 80-minute running time.