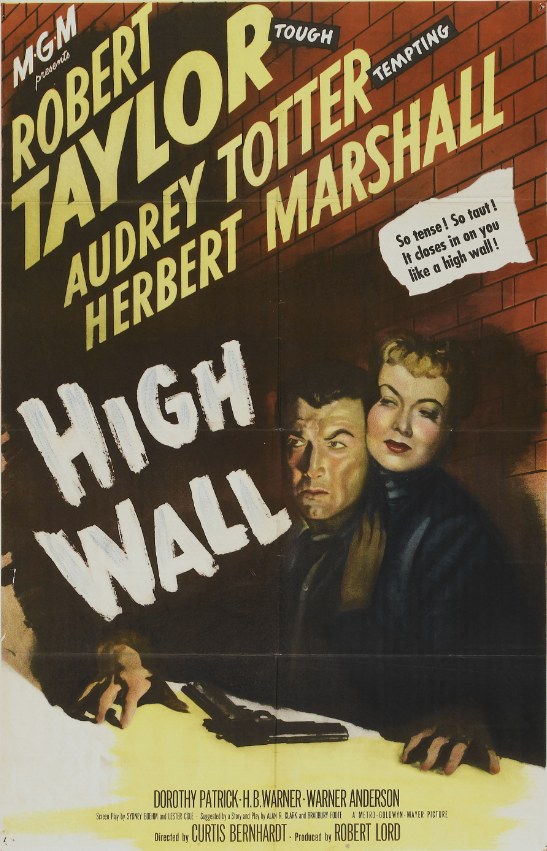 Curtis Bernhardt’s High Wall stars Robert Taylor as that most venerable of film noir archetypes — the amnesiac combat veteran who may or may not have committed murder.

Bernhardt was one of many German filmmakers who fled the Third Reich to work in Hollywood, and whose dark artistic sensibilities helped create what we now know as “film noir.” So far I’ve seen two other films he made, the excellent melodrama My Reputation (1946), which starred Barbara Stanwyck and George Brent, and the equally excellent psychodrama Possessed (1947), which starred Joan Crawford and Van Heflin.

High Wall lets Bernhardt flex his suspense-thriller muscles a little, and he’s more than up to the task.

At first glance, High Wall looks and feels like any number of similar dramas from RKO Radio Pictures — tight, well-made, black and white flicks designed for the bottom of a double bill — but it was actually produced by Metro-Goldwyn-Mayer, a powerhouse of a studio that wasn’t usually in the “noir” business.

High Wall is a pretty lean thriller, but MGM production values are evident in a few scenes, particularly when the protagonist, Steven Kenet (Robert Taylor), is sent to Hamelin County Psychiatric Hospital. The sanitarium features a big cast of extras; there are legions of brusque, businesslike cops and hospital attendants, and dozens of hapless patients lolling around on beds in the open ward. If High Wall had been an on-the-cheap production for Monogram pictures, there probably would have been one night attendant, two other patients, and sets that looked like they were on loan from a theatrical production.

Most of High Wall is shot on sets, so the exteriors are pretty fake-looking, but not distractingly so. Shooting on a soundstage also allows Bernhardt and his cinematographer, Paul Vogel, to create a dramatic rain-swept finale full of rich textures that probably wouldn’t have been possible if they’d been shooting on location. 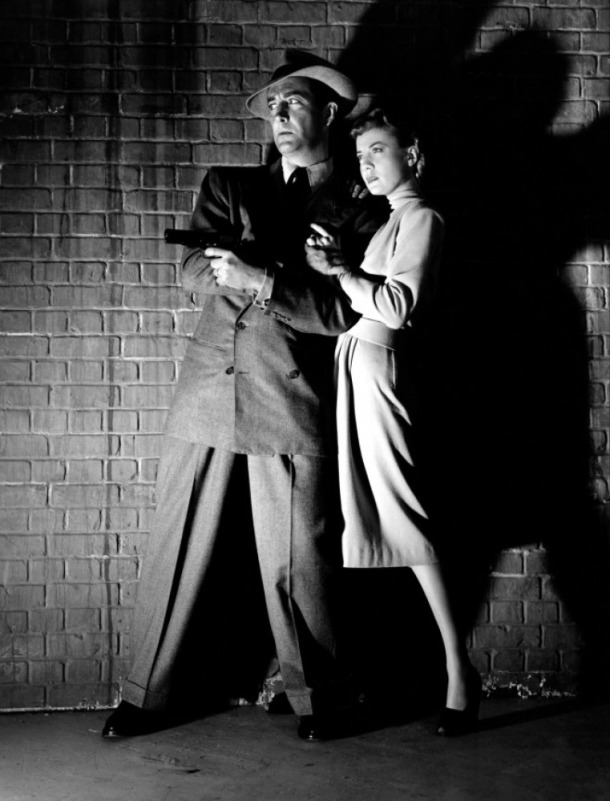 Also, with such a big cast of loonies, it’s more believable that Kenet has so much difficulty seeing his psychiatrist, Dr. Ann Lorrison (Audrey Totter).

Kenet, you see, looks like the most likely suspect for his wife’s murder. Her strangled corpse was sitting right next to him when he drove his car off a bridge in a daze, after all.

But after Kenet finally gets a few appointments with Dr. Lorrison, she starts to believe that he might be innocent. Lorrison is a no-nonsense salt-of-the-earth gal. (This is evident early in the film when she turns down a male doctor’s offer of a date at the opera because she has Red Sox tickets.)

It’s not just Kenet’s good looks, tragic aura, six-year-old son, and Distinguished Service Cross and Silver Star from World War II that attract Lorrison, it’s nagging evidence of his innocence, so she starts helping him escape from the asylum for periods of time so he can investigate upstanding citizen Willard Whitcombe (Herbert Marshall), a middle-aged man who works for Brattle Press Religious Educational Text Books.

Marshall is the perfect villain for this type of melodrama. His bearing is patrician — and his voice is one of the smoothest and most charming you’ll ever hear — but there’s clearly something very wrong with him.

For a good portion of High Wall, it’s possible to be in doubt of the outcome. Kenet looks guilty, even to the viewer, and he suffers from fainting spells. He has a subdural hematoma in the left lobe that’s causing forgetfulness, irritability, and a possible proclivity toward murder and suicide.

High Wall is a fun movie. When it comes to the question of Audrey Totter’s charm and sexiness, I was a little on the fence after Lady in the Lake (1947), but she’s utterly charming in High Wall, and much more natural in High Wall than in Lady in the Lake. (It’s possible that not requiring her to stare into the camera the whole time might have let her deliver a more natural performance.) 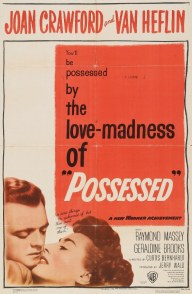 If you like to see Joan Crawford get her crazy on as much as I do, then you’ll love Possessed.

Curtis Bernhardt’s fevered noir melodrama begins with a surprisingly unglamorous-looking Crawford wandering the streets of Los Angeles in a daze, asking everyone she passes if they’ve seen “David.”

Crawford isn’t wearing any makeup, and her journey through the early dawn streets reminded me of a similar scene that appeared a decade later in Louis Malle’s Ascenseur pour l’échafaud (Elevator to the Gallows) (1958), in which Jeanne Moreau wanders the streets of Paris without makeup. (Was Malle influenced by Possessed? It’s certainly possible.)

The character Crawford plays, Louise Howell, is taken by ambulance to the psychopathic ward of the Los Angeles Municipal Hospital, where she is cared for by Dr. Willard (Stanley Ridges). He gives her narcosynthesis to lift her out of her catatonic stupor, and the tale of what brought Louise to this place is told through a haze of flashbacks and psychobabble.

Louise was a nurse in the employ of wealthy Dean Graham (Raymond Massey). Her job was to care for Graham’s infirm wife.

After a brief love affair with an average-looking but very charming architect named David Sutton (Van Heflin), Louise became hopelessly attached to him. When David told her that he wasn’t the marrying kind, and that he had to break things off with her, it began her spiral into madness. She was convinced that there was another woman, but he assured her there wasn’t.

“Louise, don’t hang onto me. You’ll get hurt,” he said in exasperation, and his words were prescient. The straitlaced, self-possessed Louise began to unravel.

Dr. Willard diagnoses her with a persecution complex. She thought that David breaking up with her was all part of a plan. Everyone was against her. Dr. Willard calls it “typical schizoid detachment … split personality.”

Despite its sometimes overheated story and dialogue, Possessed is a stylistic feast. Franz Waxman’s musical score perfectly underscores every one of Joan Crawford’s scenes, and Joseph A. Valentine’s cinematography visually expresses her madness.

There are recurring visual motifs, most notably water. For instance, when David gets into his boat and leaves Louise sobbing on the dock, the churning water symbolizes her inner turmoil. The doctors hovering over Louise’s bed discuss her case, then the scene cuts to a shot of the carafe of water by her hospital bed that dissolves into a shot of the water around Dean Graham’s home.

When Louise stops the little pendulum of her bedside clock from ticking because it’s “driving her crazy” the sound is replaced by the sound of dripping water outside her open window. She slams the window shut, trying to control her madness.

Possessed could never be called a realistic film. But that’s not its goal. It subjectively depicts an unraveling psyche, and isn’t afraid to veer into territory that sometimes seems as if it would be more at home in a horror movie than in a melodrama. 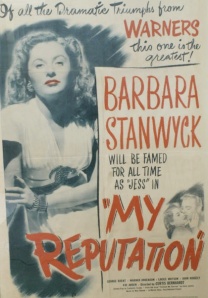 Curtis Bernhardt’s My Reputation, which premiered on January 25, 1946, and went into wide release a day later, was filmed in 1944. Prior to its stateside theatrical release, My Reputation was released for military use, and was shown to troops as entertainment during World War II. The screenplay, by Catherine Turney, is based on the novel Instruct My Sorrow, by Clare Jaynes.

On paper, this movie didn’t interest me, and I probably never would have watched it if I wasn’t doing this project. A prototypical “women’s picture,” My Reputation is about a young widow living among the upper crust of Lake Forest, Illinois, in 1942. Once I started watching it, however, it quickly drew me in. It’s a quality picture from beginning to end. The actors all deliver heartfelt performances, the situations and dialogue are realistic, and the direction, editing, and cinematography are all top-notch.

Barbara Stanwyck plays the protagonist, Jessica Drummond. When the film begins, Jessica’s husband has just died, leaving her a widow and their two sons, aged 12 and 14, fatherless. The executor of the late Mr. Drummond’s estate, lawyer Frank Everett (Warner Anderson) clearly has feelings for Jessica, but they are not reciprocated. Jessica’s mother, Mrs. Mary Kimball (Lucile Watson) has worn mourning clothes ever since her own husband died decades earlier. Jessica’s mother is scandalized when Jessica refuses to dress differently after her husband’s death. “Our kind of people wear black,” she says matter-of-factly.

When Jessica goes on a skiing vacation with Ginna and her husband, Cary (John Ridgely), she meets the the insouciant and charming Maj. Scott Landis (George Brent), who is on leave from the war. The two strike up a friendship that blossoms into a romance, but Jessica distances herself from him when he becomes too sexually forward. Landis isn’t a heel, but he is a bit of a rogue, and clearly states that he has no plans to marry. Despite this, Jessica can’t get him out of her mind, and when their paths cross again, she gives in to his advances, consenting to at least kissing. Whether more transpires between them is left up to the viewer, but there is no implication that they consumate their love. This doesn’t change the scandalous nature of their relationship, and Jessica quickly finds herself ostracized from the gossipy circles in which she runs. She stands up for herself, but the disapproval of her mother and her friends is nothing compared with the criticism she receives from children, especially her younger son, who says, “But you belong to dad. It doesn’t make any difference whether he’s dead or not.”

My Reputation ends on a hopeful note, but its depiction of an intelligent, sensitive woman living in a stifling social milieu is still hard to watch. The viewer’s frustration is mitigated, however, by the excellence of the production, especially the attention to detail that makes a well-made film such a joy to watch. For instance, in a scene in which Jessica confronts her mother, the shot is framed so that a large portrait of Jessica as a child and her mother as a younger woman hangs in the background between them. The juxtaposition says nearly as much as their heated words.