Fred Astaire and Ginger Rogers are back, for one final engagement!

The Barkleys of Broadway was their first pairing in a decade. It was also the only film they made for Metro-Goldwyn-Mayer, and the only time they were onscreen together in Technicolor.

In the 1940s, Ginger Rogers established herself as an actress in dramas and comedies, and Fred Astaire established himself as a successful solo star in musicals like Holiday Inn (1942) and Easter Parade (1948).

Astaire was set to make another film with Judy Garland, his co-star in Easter Parade. It was going to be called “You Made Me Love You,” after one of Garland’s hit songs. But when she was forced to drop out of the project, producer Arthur Freed cast Ginger Rogers to replace her … because the world can never have too much Ginger Rogers and Fred Astaire.

When the two perform their first tap number in The Barkleys of Broadway, it’s joyful and exhilarating, and it’s hard to believe that more than 10 years have passed since they made a film together.

In The Barkleys of Broadway, Astaire and Rogers play Josh and Dinah Barkley, a married couple who are wildly successful onstage but who can’t go two minutes without bickering offstage. Their partner Ezra Millar (Oscar Levant) tries his best to keep them in check, but even he can’t keep them together when a handsome French playwright named Jacques Pierre Barredout (played by Jacques François) convinces Dinah that she should become a “serious” actress and star in his new play about Sarah Bernhardt.

Josh continues performing on his own. The high point of his solo career is the impressively surreal number “Shoes With Wings On,” in which a bunch of dancing shoes live up to their name.

Dinah struggles under Barredout’s dictatorial direction, so Josh takes to impersonating the Frenchman over the phone after rehearsals to give Dinah the kind of direction he knows will help her.

Eventually they are brought back together by Ezra’s machinations, which leads to an emotional performance of the song “They Can’t Take That Away From Me,” which Astaire had previously sung to Rogers in the film Shall We Dance, but which they had never danced to on film before.

The Barkleys of Broadway is a lot of fun. It’s great to see Astaire and Rogers back together, and Oscar Levant is his usual acerbic, deadpan self. (He also gets a chance to do what he does best — entertain on the piano.)

The film’s music is mostly by Harry Warren, with lyrics by Ira Gershwin. (“They Can’t Take That Away From Me” is by George and Ira Gershwin.)

The story is inconsequential, but that’s the case with most movie musicals. This film is an excuse for some singing, dancing, and comedy, and it’s all wonderful. The fact that Ginger Rogers and Fred Astaire would never make another film together makes it a slightly bittersweet viewing experience, but it’s not that bittersweet. After all, they left us with a tremendous cinematic legacy, and nothing lasts forever. 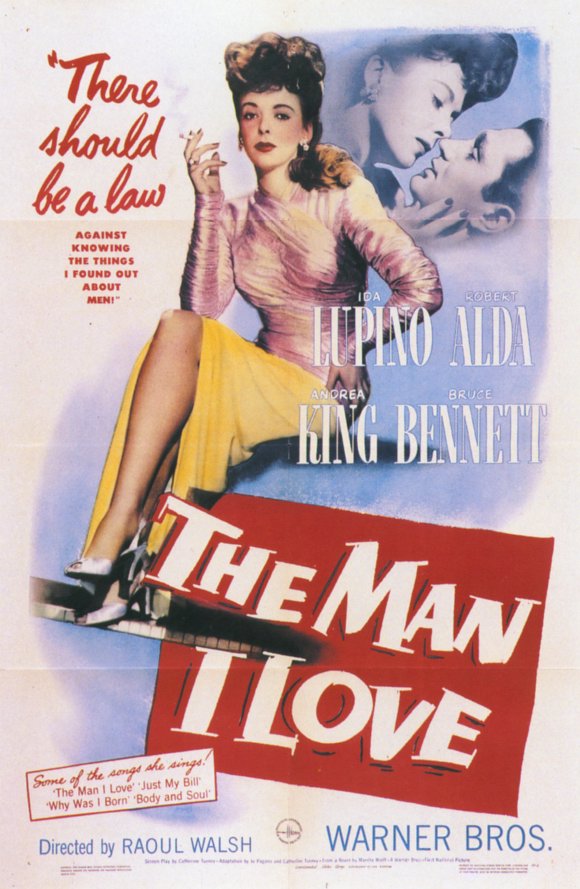 The Man I Love (1947)
Directed by Raoul Walsh
Warner Bros.

Loving the popular music of the ’30s and ’40s isn’t a prerequisite for enjoying Raoul Walsh’s The Man I Love, but it sure helps.

If you don’t like old pop standards (I do, and found myself humming “The Man I Love” constantly for about a day after I watched this movie), then you’d better like “women’s pictures,” because that’s what this is. (I’ve seen The Man I Love called a film noir, but it’s not. Half the movie takes place in nightclubs, and there’s a hint of criminal malice every now and then, but that alone does not a noir make.)

The most prominent tune is the one that gives the film its title, George and Ira Gershwin’s sublime “The Man I Love” — both as a smoky nightclub number and as a constant refrain in Max Steiner’s lissome score — but there are plenty of other great songs, like Jerome Kern and Oscar Hammerstein’s “Why Was I Born?” and James P. Johnson and Henry Creamer’s “If I Could Be With You.” There are also tunes just tinkled out on the piano, like George Gershwin’s “Liza (All the Clouds’ll Roll Away)” and Johnny Green’s “Body and Soul,” suffusing the film with a nostalgic languor that’s a nice counterpoint to all the melodrama.

When New York nightclub singer Petey Brown (Ida Lupino) packs her bags for Los Angeles to visit her siblings, she’ll find love, lose love, flirt with danger, and leave things a little better off than she found them. The poster for The Man I Love features the following tagline: “There should be a law against knowing the things I found out about men!” This is a bit of an overstatement, since most of what Petey finds out about men in this picture is what most clear-eyed women already know; most of them are rotten, some are crazy, some are sweet but naive and dim-witted, and the few you fall for are probably in love with another dame who they’ll never get over.

Petey’s sister Sally Otis (Andrea King) has a young son and a husband, Roy Otis (John Ridgely), who’s languishing in a ward for shell-shocked soldiers. Sally lives with the youngest Brown sister, Ginny (Martha Vickers), who’s 18 and should be enjoying life, but instead spends most of her time caring for the infant twins of their across-the-hall neighbors, Johnny and Gloria O’Connor (Don McGuire and Dolores Moran). Joe Brown (Warren Douglas) — the girls’ brother — is hip-deep in trouble. He’s working for a slimy nightclub owner named Nicky Toresca (Robert Alda) and seems destined for a one-way trip to the big house.

There are a few potentially interesting stories that never really go anywhere, such as Ginny’s attraction to Johnny, whose wife is two-timing him, and Sally’s relationship with her mentally ill husband. For better and for worse, Lupino is the star of The Man I Love, and her dangerous dealings with Nicky Toresca and her doomed romance with a pianist named San Thomas (Bruce Bennett) who’s given up on life dominate the running time of the picture.

The actors are all fine, and the stories are involving, but it’s the music that elevates this picture. Ida Lupino expertly lip synchs her numbers, which were sung by Peg La Centra (who can be seen in the flesh in the 1946 film Humoresque, singing and playing the piano in two scenes in a dive bar).

There’s also at least one allusion to a popular song in the dialogue. When Petey sees the twins and asks “Who hit the daily double?” Gloria responds gloomily, “Everything happens to me,” which is the title of a Matt Dennis and Tom Adair song first made popular by Frank Sinatra when he was singing for Tommy Dorsey’s band. There are probably other little in-jokes like that sprinkled throughout, but that was the only one I caught.