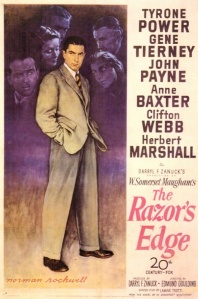 Edmund Goulding’s The Razor’s Edge, based on the best-selling 1944 novel by W. Somerset Maugham, features an Academy Award-winning performance by Anne Baxter in a supporting role, great-looking sets, deliciously bitchy acting by Clifton Webb, and a chance for Tyrone Power and Gene Tierney to show that they were better actors than they are usually given credit for.

So why didn’t I like it? Everything about this film reeks of “Oscar bait.” It’s high-minded, pretentious, and self-important, but ultimately shallow. There are a number of interesting characters in the framing sections of the film, but the central story about a young man named Larry Darrell (Tyrone Power) seeking enlightenment in Eastern spirituality falls flat, and everything else in the movie hangs on it.

Darrell is a veteran of the Great War who returns home to Chicago in 1919 questioning life after a fellow soldier — a friend of his — died saving his life. His confusion and guilt lead him to reject ordinary life and travel the world searching for meaning. He leaves behind his fiancée, porcelain-skinned beauty Isabel Bradley (Gene Tierney), as well as a sharply drawn cast of supporting characters; Isabel’s uncle, the fabulously wealthy and snobbish Elliott Templeton (Clifton Webb), the tragic hanger-on Sophie MacDonald (Anne Baxter), and “regular guy” Gray Maturin (John Payne). Just as in the novel, Maugham himself (played by Herbert Marshall) pops in and out of these characters’ lives.

When Tyrone Power first appears in the film, the character of Maugham says in voiceover, “This is the young man of whom I write. He is not famous. It may be that when his life at last comes to an end, he will leave no more trace of his sojourn on this earth than a stone thrown into a river leaves on the surface of the water. Yet it may be that the way of life he has chosen for himself may have an ever-growing influence over his fellow men, so that, long after his death perhaps, it may be realized that there lived in this age a very remarkable creature.”

Maugham’s words are prophetic. In the decades after he wrote The Razor’s Edge, many young men (and some women) would seek wisdom and enlightenment just as Larry does, traveling the world working a series of menial jobs and seeking truth in non-Christian religions.

While working in a coal mine in France, Larry plays cards and drinks with an old man who eventually turns out to be (unshockingly, based on the dialogue that passes between them) a defrocked priest running away from himself. The priest tells Larry of an Indian holy man who is vastly wise, and who may be able to set Larry straight.

Larry makes his way to India, and it was at this point that — at least for me — the movie took a nosedive. While all kinds of terrible things are happening to the other characters — Isabel is in a loveless marriage, Sophie loses her baby and becomes an alcoholic, etc. — Larry hangs out in a set that looks left over from Anna and the King of Siam and studies with an Indian guru who is ridiculously played by British actor Cecil Humphreys. The holy man speaks only of “God,” nothing specific, and certainly nothing polytheistic. His mysticism is inoffensive New Age stuff along the lines of Deepak Chopra’s vague aphorisms.

After Larry learns all he can from books, the holy man sends him on a pilgrimage to the mountains, where he receives “enlightenment” in the form of a matte painting of sun bursting out from behind the clouds and one last mealy-mouthed conversation with the guru.

All of this might have been meaningful in the novel. I can’t say, as I haven’t read it. But at least in this film, Larry’s spiritual journey is a bunch of vague nonsense that trades on the supposed exoticism of the East without actually including anything strange or specific enough to offend Peoria. Worst of all, he returns to his circle of friends, who are now bumming around Europe, with what amounts to a bag of parlor tricks. He does some hypnosis, forcing his friend Gray to drop a coin after he counts to ten and then tells Gray that he will feel pain no longer. Stuff like that. I was surprised he hadn’t learned to turn himself invisible, like Lamont Cranston in The Shadow.

When the movie ends, we’re supposed to believe that everyone who came into contact with Larry is better, somehow, because he is possessed of the most powerful force in the universe, goodness. But what is it about him makes him so good? He agrees to marry Sophie when she is in the depths of her alcoholism, which leads another character to describe him as being in the grips of self-sacrifice, which seems more apt.

Is Larry a good person because, at the end of the film, he works his way back to America on a tramp steamer? So do legions of cruder, simpler men. Does the mere fact of Larry’s enlightened attitude make his manual labor somehow nobler than the manual labor of “lesser” men? If it does, then why? The film never answers this question, but rather asks us to accept its thesis at face value.

I love all the actors in The Razor’s Edge, and they give some of the best performances of their careers in this film. But while it contains plenty of strong individual scenes, it’s a sodden, overlong snoozefest.