I’ve amassed a large collection over the years, and each radio show is identified by date broadcast so I can listen to them on the same day of the week they were originally broadcast, and on roughly the same date. (For 64 years ago, you add 3 to the day’s date.) I have enough old-time radio shows on MP3 that I’m rarely able to listen to all of each day’s programming, which is fine — in the ’40s no one listened to everything, and I’m sure plenty of people missed their favorite shows if they were out for the evening.

Currently, the shows from 64 years ago that I hate to miss include The Adventures of Sam Spade with Howard Duff and Lurene Tuttle, Suspense, The Whistler, The Great Gildersleeve with Harold Peary, and The Adventures of Philip Marlowe with Gerald Mohr.

I have plenty of episodes of Boston Blackie downloaded, but most weeks it’s not a show I go out of my way to listen to. On the other hand, whenever I do listen to it, I have a good time.

I feel the same way about both Boston Blackie movies I’ve seen — Boston Blackie and the Law (1946) and this one, Trapped by Boston Blackie (1948), which was directed by Seymour Friedman and released by Columbia Pictures — it wasn’t on my “must watch” list, but I taped it when it was on TCM a few months ago, and I had a good time watching it.

Horatio Black, a.k.a. “Boston Blackie” was created by writer Jack Boyle in 1914. Blackie started out as a professional thief but eventually became a crime-fighter and detective-for-hire. The character appeared in a variety of magazine stories and a number of silent films starring different actors. It wasn’t until the first sound film about the character, however, that one actor would play the character more than twice. Meet Boston Blackie (1941) starred Chester Morris as the gentleman safecracker and high-society thief, and Morris would go on to play Boston Blackie in a total of 14 films. (Except for a brief run during the summer of 1944 that starred Morris, the radio version of Boston Blackie that most people remember starred Richard Kollmar. The series that starred Kollmar was syndicated to Mutual and other stations and ran from 1945 to 1950.)

The film version of Boston Blackie doesn’t make quite as make puns and wisecracks as his radio counterpart, but they’re both smooth-talking, distinguished gentlemen who still have a streak of criminality, despite being mostly reformed.

Trapped by Boston Blackie was the penultimate film in the series. (The last was Boston Blackie’s Chinese Venture, released in 1949.)

In Trapped by Boston Blackie, Blackie and his weaselly sidekick, “The Runt” (George E. Stone), are hired to protect a valuable pearl necklace at a high-society party, but it goes missing from under Blackie’s nose, and he and The Runt are the prime suspects.

After the theft, The Runt says to Blackie, “At least we’re innocent.” Pause. “Or are we?”

Blackie spends most of the film’s running time wearing some kind of ridiculous disguise. First he dresses up as an Eastern mystic in order to circulate freely around the party and keep an eye on the necklace (and kids, when Blackie examines his costume before putting it on and holds up the turban and exclaims “Gay!” it doesn’t mean what you think it means).

Later, in order to track down the necklace, Blackie disguises himself as a fussy old man with The Runt in drag as his wife. (The Runt uses his old-lady disguise as an excuse to give a pretty young woman played by Patricia Barry a creepy and overly familiar hug.) Later, Blackie affixes a fake mustache to his upper lip and passes himself off as an insurance investigator.

And of course he’s dogged all along the way by his arch-nemesis and sorta-pal, Inspector Farraday (Richard Lane), who’s assisted by the extremely dim-witted Detective Sergeant Matthews (Frank Sully).

Trapped by Boston Blackie is not the first mystery programmer from Columbia Pictures I’d recommend if you’ve never seen one before, but if you’re a fan of the Boston Blackie series, it’s solid good fun. 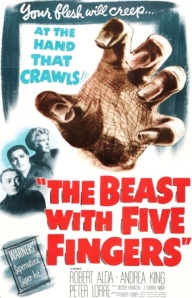 Robert Florey’s horror flick The Beast With Five Fingers begins with the following words: “This is the story of what happened — or seemed to happen — in the small Italian village of San Stefano — nearly fifty years ago.”

Normally in my reviews I try to avoid spoilers. I’ll summarize the plot, but only up to a point, and I try to talk around any big twists. But since The Beast With Five Fingers is pretty up-front about its unreal elements right from the start, I’m just going to give everything away about this movie willy-nilly. So if you don’t like spoilers, stop right now and go read my review of Tarzan and the Leopard Woman. I totally don’t give away how hot Brenda Joyce looks in it.

Anyway, The Beast With Five Fingers is based on a short story written in 1919 by W.F. Harvey (1885-1937), an English author who is also famous for penning the story “August Heat,” which was memorably adapted for the radio show Suspense in 1945, in a show starring Ronald Colman.

The script for the film was written by Curt Siodmak, who intended it to be a vehicle for Paul Henreid. Henreid turned it down, however, reportedly saying, “I’m not wild to play against a dead hand.”

Peter Lorre, in his last film role for Warner Bros., was cast instead. Siodmak felt this casting was less effective, since the audience immediately assumes that Lorre is a psychopath, which they wouldn’t when presented with a handsome, self-contained actor like Henreid. I tend to agree, especially since Lorre does nothing to disabuse the viewer of the notion that he’s a raving maniac. From his very first scene, Lorre does what he did best; act completely creepy and insane.

Lorre plays Hilary Cummins, an astrologer who takes his work very seriously. He’s employed as secretary to partially paralyzed concert pianist Francis Ingram (Victor Francen), but if Hilary does any actual work for Ingram, we don’t see it. He’s unashamed to admit that he wants Ingram’s nurse, Julie Holden (Andrea King), to constantly dote on him so he can be left alone to discover a “key to the future,” which Hilary claims was known only to the ancient astrologers, but has been lost since the burning of the great library at Alexandria.

There are other hangers-on in Ingram’s Italian villa, such as Ingram’s attorney, Duprex (David Hoffman), and Bruce Conrad (Robert Alda), a small-time con man and composer who seems stymied by his association with Ingram. Conrad transcribed some Bach pieces, modifying them to be played by a one-handed pianist, and ever since, has been unable to write anything.

Ingram is a petty tyrant and thoroughly unpleasant man. His right side might be paralyzed, but his left hand is incredibly strong, as he demonstrates in a memorable scene in which he strangles Lorre — who is more than capable of the histrionic puffing and wheezing required of him when Ingram finally lets go.

One dark and stormy night, Ingram rolls around the villa in his wheelchair, pitifully crying for Julie. He pitches down the stairs, and the fall kills him.

His death brings a few greedy relatives (played by Charles Dingle and John Alvin) out of the woodwork, eager to hear the reading of the will. They’re not happy when Duprex informs them that Ingram recently changed his will to leave everything to Julie.

For most of its running time, The Beast With Five Fingers is a fairly standard haunted-house mystery, but it has a strange premise that’s always bubbling beneath the surface, namely that you’re going to see some kind of five-fingered beastie scuttle around for at least some of the picture.

This odd premise is delivered on eventually. After Duprex is murdered, the other occupants of the villa open the sarcophagus holding Ingram and find him clutching a push dagger in his right hand, his left hand missing … cut off.

Enter J. Carrol Naish as commissario of police Ovidio Castanio. It’s one of many “ethnic” roles Naish sunk his teeth into (see also Humoresque and the radio show Life With Luigi), and like everything else in the film, it’s more silly than scary, but Naish is a good actor, and he gets one of the film’s best moments, during the last minute of the picture.

The eponymous crawling thing doesn’t show up until almost an hour has passed. The final 20 minutes of The Beast With Five Fingers, however, deliver what the audience paid to see … a phantasmagoria that only exists in Lorre’s mind. He watches Ingram’s disembodied hand float over the keyboard, playing Bach’s Chaconne in D minor as arranged for the left hand by Brahms (who was friendly with composer Max Steiner’s family back in Vienna). He then rips apart the library to find the crawling hand and attempts to stop it by nailing it down. It’s classic Lorre … all bug eyes and feverish gasping. And although it probably played pretty gruesomely at the time of the film’s release, it’s all campy good fun now.

Florey directed the silly proceedings in a solid, professional fashion, with plenty of fluid camerawork and smooth dolly shots. Time magazine said in their review of the film that Florey was “plainly untroubled by considerations of taste,” but the worst thing in this picture is a disembodied hand that crawls around on its fingers, strangling a few people here and there. It’s an effective special effect, but too ridiculous to ever be taken seriously. This is one you can watch with the kids during prime time.