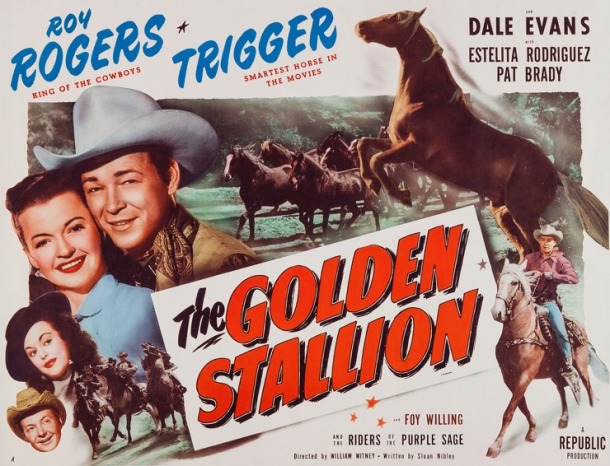 Of the more than 70 oaters that starred Roy Rogers, Dale Evans, and Trigger (the smartest horse in the movies), The Golden Stallion is the best known by today’s film geeks.

The reason for this is an article published in the September 15, 2000, issue of the NY Times called “Whoa, Trigger! Auteur Alert!”, in which Quentin Tarantino waxed rhapsodic about the films of William Witney.

I remember reading the article when it was first published and being immensely pleased. The writer of the piece accurately called Witney “a now all-but-forgotten journeyman director,” but I’ve been a fan of his serials since I was in high school. I watched a lot of serials when I was younger, and it was hard not to notice that the cream of the crop all bore his name as director. Along with his frequent co-director, John English, Witney made one memorable Republic serial after another, like Drums of Fu Manchu (1940), Adventures of Captain Marvel (1941), Jungle Girl (1941), Spy Smasher (1942), The Crimson Ghost (1946), and others too numerous to list here.

In the postwar era the market for serials started to dry up, and Witney turned to making westerns for Republic Pictures, including many with Roy Rogers. Tarantino loves what Witney did with Rogers’s films during this period.

“After their first few movies together,” Tarantino said, “Witney had gotten Roy out of his fringe-and-sparkle attire and was dressing him in normal attire, blue jeans and stuff. They stopped being these crazy musicals. He turned them into rough, tough violent adventures.” 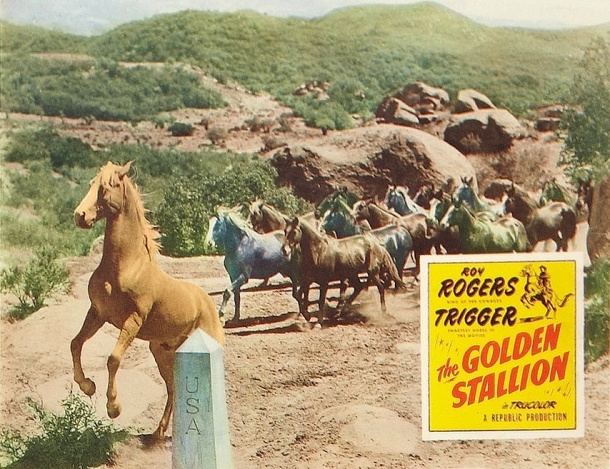 Tarantino is absolutely right. Witney was an old hand at directing knock-down drag-out fistfights in serials, and he brought this experience to his features with Roy Rogers.

The best fight I’ve seen in a Roy Rogers film that Witney directed is probably the one in Bells of San Angelo (1947), but all of their collaborations had plenty of action, and The Golden Stallion is no exception. What I found most impressive about The Golden Stallion were not any of the fight scenes, but rather the scenes of Trigger galloping at the head of a herd of wild horses. These sequence appear to have been filmed from a jeep, and they’re full of speed and drama.

So is The Golden Stallion — as Tarantino claims — the best film that Witney and Rogers made together?

That’s hard for me to say, because their films were of such a consistent level of quality (for better and for worse). Like all of their other films, The Golden Stallion had a low budget, a tight shooting schedule, and hokey humor. But it has a better-than-average plot (about a gang smuggling uncut diamonds over the border hidden in horseshoes nailed to the hooves of wild horses), a great scene where Roy has to make an enormous sacrifice to save Trigger’s life, and some really beautiful filmmaking.

If you like B westerns — especially if you like B westerns with singing cowboys — you really can’t go wrong with any of the Roy Rogers films that Witney directed. But if you’re unsure about B westerns and you want to see just one, check out The Golden Stallion. Just make sure you watch the full version, which is 67 minutes long. There’s a truncated version that’s less than an hour long currently on YouTube, but the full color version is available to stream if you’re an Amazon Prime member.