Maybe I’ve been watching too many crime melodramas, but I kept expecting Otto Preminger’s Daisy Kenyon to go in a different direction than it did. It’s a movie that’s often classified as a film noir, and the cinematography by Leon Shamroy is an atmospheric blend of light and shadow. David Raksin’s score is lush and moving. The performances of the film’s three stars are all excellent.

But I kept expecting things to devolve into murderous tragedy, and it was a little disconcerting when they didn’t. Granted, the film was based on a controversial bestseller by Elizabeth Janeway about adultery, so plenty of film-goers in 1947 and 1948 knew exactly what to expect when they bought their tickets. I, on the other hand, was thrown for a loop by how understated and mature the story ended up being.

Daisy Kenyon (Joan Crawford) is a successful commercial artist who is in a long-standing relationship with a married man, a lawyer named Dan O’Mara (Dana Andrews). When the film begins, she’s beginning to realize that Dan is never going to leave his wife for her, even though he loves Daisy very much. This opening put me in mind of Joan Crawford’s last picture, Possessed (1947), which could be why I kept expecting Daisy Kenyon to end in a murder, a suicide, or both.

Another reason is the creepy, shell-shocked performance of Henry Fonda as combat veteran Peter Lapham, the man Daisy hastily marries after she breaks off her affair with Dan. 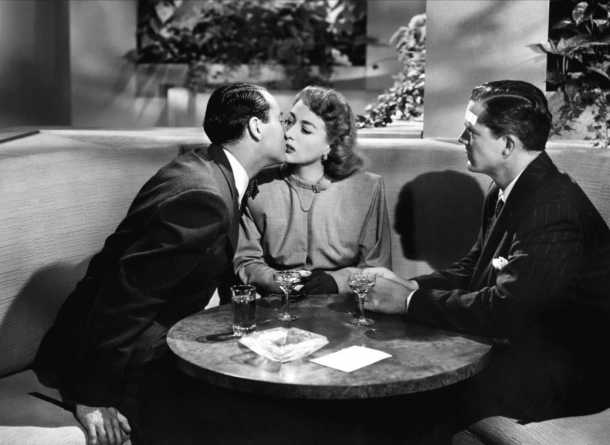 Interestingly, Daisy Kenyon is a story in which things start to go bad not when an adulterous love affair begins, but when it ends.

Even though there is a good deal of tension in the relationships between the characters in Daisy Kenyon, I didn’t find myself very invested in the story. I did appreciate that it was a well-made film with no real heroes or villains, but it never fully captured my imagination. The last 10 minutes are really good, however, and I honestly didn’t know how it was going to end.

Walt Disney’s Song of the South is the first movie I ever saw. (I think my mother may have taken me to some movies when I was a baby, but that doesn’t count.) Seeing it in the theater was a big deal for me. The most sophisticated piece of electronics we had growing up was a KLH radio, and the only time I saw television was at my grandmother’s house. (She had a 13″ black & white Zenith.) I don’t know exactly when I saw Song of the South, but it must have been during the film’s 1980 re-release.

Song of the South premiered in Atlanta on November 12, 1946. It was the first film to have its premiere there since Gone With the Wind in 1939.

Based on Joel Chandler Harris’s books about an old storyteller named Uncle Remus, the film was controversial even before it went into production. In 1944, the Production Code Administration suggested a number of changes to Dalton Reymond’s script to minimize its potential to offend black filmgoers, including the following: that the phrase “old man” be substituted for “old darkie,” that the term “Mister John” be substituted for “Marse Jawn,” and that it be made clear that Uncle Remus belongs to a bygone era. Walt Disney did not, however, take their suggestion that it be made clear that the film takes place after the Civil War, when slavery was abolished, which is what got him into the most trouble.

Disney was not insensitive to the potential that Song of the South had to upset audiences. To deflect some potential flak, he brought in left-leaning Maurice Rapf, an emeritus director of film studies and an adjunct professor at Dartmouth College, to write a treatment of Reymond’s script that had the main white family living in a run-down farmhouse, not a beautiful plantation, and cut out scenes of black plantation workers going about their duties in a happy and docile fashion while singing uplifting spirituals. (Rapf, who was both Jewish and a Communist, denies that Walt Disney was intolerant, and said that while Disney was a conservative, he accepted the political and religious differences of the men who worked for him, many of whom were Jewish and/or leftists.)

For whatever reason, however, all of the aforementioned changes remained in their original form in the final cut of the film. In the cinema section of the November 18, 1946, issue of Time magazine, their reviewer wrote that “Tattered ol’ Uncle Remus, who cheerfully ‘knew his place’ in the easygoing world of late 19th Century Georgia … is a character bound to enrage all educated Negroes, and a number of damyankees.”

Walter White, executive secretary of the NAACP, sent a telegram to the press on November 27, 1946, that said the following: “The National Association for the Advancement of Colored People recognizes in ‘Song of the South’ remarkable artistic merit in the music and in the combination of living actors and the cartoon technique. It regrets, however, that in an effort neither to offend audiences in the north or south, the production helps to perpetuate a dangerously glorified picture of slavery. Making use of the beautiful Uncle Remus folklore, ‘Song of the South’ unfortunately gives the impression of an idyllic master-slave relationship which is a distortion of the facts.”

Ebony magazine was less tempered in their criticism of the film. They wrote, in a full-page jeremiad against the film, that Song of the South promoted “Uncle Tomism as the model of how Negroes should behave in white company.” Of the film’s star, they wrote, “James Baskett, who symbolically enough was taken from the Amos ‘n’ Andy radio show to portray Remus, is an Uncle Tom-Aunt Jemima caricature complete with all the fawning standard equipment thereof — the toothy smile, battered hat, grey beard, and a profusion of ‘dis’ and ‘dat’ talk. He lives up to his ‘lovable’ billing — certainly to Dixie audiences for whom any Negro who bows and scrapes is ‘lovable.'”

Most negative reviews of the film did, however, praise the animated sections of the film, which featured the antics of the crafty Br’er Rabbit, the diabolical Br’er Fox, and the slow-witted Br’er Bear. And the Academy of Motion Picture Arts and Sciences liked Baskett’s performance as Remus enough to give him an honorary award at the 20th Academy Awards in 1948 “For his able and heart-warming characterization of Uncle Remus, friend and story teller to the children of the world, in Walt Disney’s Song of the South.” (On the other hand, this took him out of the running for a real Oscar.)

While I don’t disagree with Ebony magazine’s assessment of the character of Uncle Remus, I do think Baskett gives a remarkable performance, full of warmth and humanity. There are some cringe-worthy moments, but overall I was moved by the character he created. It’s worth pointing out that Baskett also provided the voice for Br’er Fox, whose malevolent, mile-a-minute line delivery is so different from Remus’s slow, rich baritone that I never would have guessed it was Baskett’s voice if I hadn’t looked it up.

Remus comes into the life of a young white boy named Johnny (Bobby Driscoll) just when Johnny needs him most. Johnny’s father has left for Atlanta, and the boy wants to run away from home. Unlike Johnny’s mother, Remus understands the psychology of children, and instead of telling Johnny he shouldn’t run away, he gently steers him in the right direction by first agreeing to go with him, then telling him a story about a time when Br’er Rabbit was fed up and wanted to run away from all his troubles.

While the film presents a bucolic and idealized view of the Old South, there’s plenty of sadness, if you care to look for it. Johnny’s friendship with a black boy his own age is presented in a sweet, uncomplicated fashion, but look deeper. When the boy, Toby (Glenn Leedy), comes into Johnny’s room in the morning before a day of playing together, the first thing he does is pour water into the basin on top of Johnny’s bureau. Also, when Johnny runs off, Toby is viciously scolded by the older black servants in Johnny’s family, because it was Toby’s job to care for Johnny. Johnny is still the master and Toby is still the servant, and it’s doubtful that the two would have been able to remain friends into adolescence.

There’s also a running conflict between Johnny and two poor white boys who want to drown the puppy that Johnny got from them. While Uncle Remus scolds the two boys and runs them off when they bully Johnny, his authority only goes so far. When Johnny’s mother orders him to give back the puppy, Remus’s impotent rage is truly heartbreaking.

It’s hard to enjoy the third cartoon segment if you’re preoccupied with wondering whether or not the bad boys drowned that puppy. And while the puppy shows up for the final sequence of the film, the whole thing has a sense of unreality about it, since all the cartoon characters show up to interact with the happy children and Uncle Remus, who rubs his eyes ’cause he can’t hardly believe what he’s seeing! Br’er Rabbit right there? Yes indeed.

While Song of the South was re-released in U.S. theaters in 1956, 1972, 1980, and 1986, it has never been released in the United States on any home video format, and there are currently no plans to do so. Earlier this year, Disney CEO Robert Iger reiterated that there are no plans to release the film on DVD in the United States. He called Song of the South “antiquated” and “fairly offensive.” (Apparently this is something of an annual tradition at Disney shareholder meetings.)

Re-watching this film after 30 years was an interesting experience. While I didn’t pick up on all the subtleties when I first saw the film, I was surprised by how much I remembered. The cartoon sequences are a lot of fun, and the live-action sections contain much that is noteworthy. If Disney had taken Rapf’s advice — or if they had gone even further and removed every human actor except for Baskett and Driscoll — you’d probably be able to buy a deluxe DVD edition of Song of the South this Christmas for your kids.

It’s worth remembering, though, that no matter how the film’s themes had been presented, the star of Song of the South would not have been able to attend the film’s premiere in Atlanta. In 1946, it was still a segregated city. While Baskett would have been able to stay in one of the city’s black-owned hotels, he simply would not have been allowed to participate in any of the public events associated with the premiere.