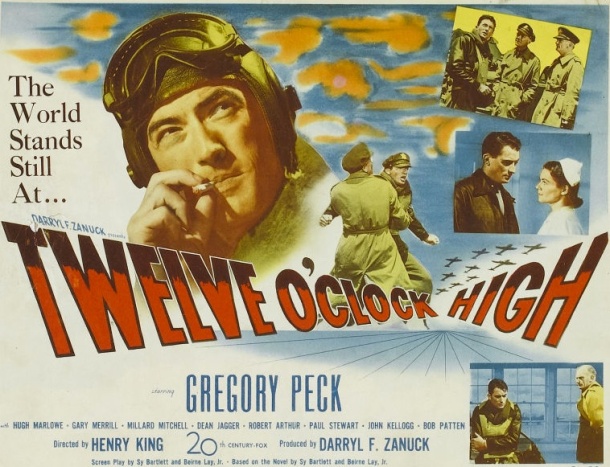 In my review of Battleground (1949) last month, I referred to it as “a return to films about World War II that focused on the combat experience.”

So I’ll take the hit on that inaccuracy.

Anyway, Twelve O’Clock High was the third in a string of high-profile studio pictures about World War II released toward the end of 1949, all of which received several Oscar nominations. (Battleground and Sands of Iwo Jima were the first two.)

Twelve O’Clock High was directed by Henry King. The screenplay was adapted by Beirne Lay Jr. and Sy Bartlett from their novel of the same name, which was based on their own experiences in World War II. Most of the characters in the book and film are based on real people or are composites of several people.

The film begins in 1949, when Harvey Stovall (Dean Jagger), who spent most of the war as a Major in the U.S. Army Air Forces, has his memory stimulated by a Toby Jug he finds in a London shop. It’s identical to the one that used to sit in the officer’s club of his old airfield at Archbury. He bicycles out to the site of the airfield, which is now just a field of gently waving grass, and he falls into a reverie.

Twelve O’Clock High details the extreme stress suffered by the members of the 918th Bomb Group, who flew daring daylight precision bombing runs and suffered heavy losses to anti-aircraft fire and to the Luftwaffe. When their commanding officer, Colonel Keith Davenport (Gary Merrill), begins to crack under the strain, he is replaced by Brigadier General Frank Savage (Gregory Peck).

Savage is so hard and unforgiving that for most of the film he doesn’t seem quite human. The men loved Colonel Davenport, but the closeness probably affected his leadership. On the other hand, they hate Brigadier General Savage so much that every man in the 918th applies for a transfer. Savage grants their requests, but ties them up with red tape long enough to whip the men into shape, and eventually their feelings change when their bombing runs become more successful and they suffer fewer casualties.

Early in Twelve O’Clock High there is a spectacular sequence in which a B-17 crash-lands. It was pulled off by stunt pilot Paul Mantz, who took off and crash-landed without any assistance. Most of the film, however, is a portrait of combat stress. Even the most stoic characters in the film eventually crack under the pressure. When the actual combat footage is used toward the end of the film, the audience already has a sense of what the pilots and crewmen are experiencing, and how dangerous their missions are. 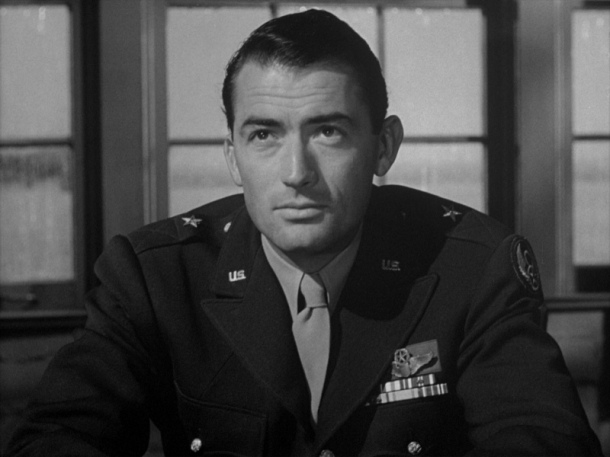 Twelve O’Clock High is a really good World War II movie, and by all reports an extremely accurate one. I didn’t emotionally connect with it the same way I connected with Battleground, but that’s just a personal preference. If you have any interest in the air war in Europe, particularly how B-17 bombers were used, then Twelve O’Clock High is a must-see film.

It was nominated for four Academy Awards, including Best Picture and Best Actor for Gregory Peck. It won two Oscars: Best Supporting Actor for Dean Jagger and Best Sound Recording.