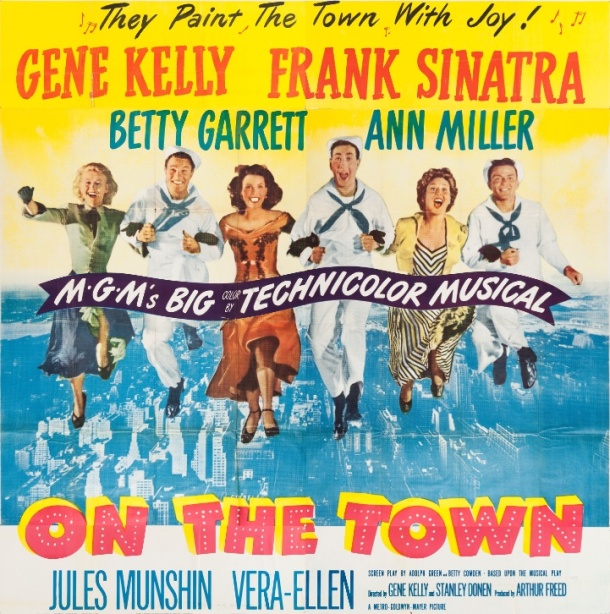 For me, On the Town is joy. Pure joy.

I loved the first film Frank Sinatra and Gene Kelly made together, Anchors Aweigh (1945). I also enjoyed their second collaboration, Take Me Out to the Ball Game (1949), but On the Town is the enduring classic of the bunch. It takes everything that worked about their previous two pairings and adds more comedy and a dizzying parade of New York City locations.

Normally musicals aren’t my favorite genre, but I love Gene Kelly’s dancing (who doesn’t?) and I love Frank Sinatra’s singing (I know not everyone does, but if you don’t, let’s just agree to disagree), so Anchors Aweigh was a pleasant surprise when I first watched it several years ago.

Since then, I’ve warmed up to the Technicolor musical extravaganzas of the 1940s. Musicals still aren’t my thing, but the candy-colored singing and dancing spectacles from Hollywood’s golden age are extremely impressive. At their best, like On the Town, they weave a magic spell that enthralls even a curmudgeon like me.

On the Town stars Gene Kelly, Frank Sinatra, and Jules Munshin as Gabey, Chip, and Ozzie, a trio of sailors who have 24 hours of shore leave to tear through New York City and paint the town red.

Chip is waylaid by an amorous cab driver with the unlikely name of “Brunhilde Esterhazy.” She’s played by Betty Garrett. It’s similar to the man-crazy character she played in Take Me Out to the Ball Game, but her pursuit of Frank Sinatra in On the Town hits sexually suggestive heights that were only hinted at in Take Me Out to the Ball Game. All Chip wants to do is tour New York, from the Bronx to the Battery and everywhere in between, but Brunhilde responds to every single one of his touristy suggestions with an emphatic counteroffer, “Come up to my place!”

Ozzie is pursued by a beautiful anthropologist named Claire Huddesen, who’s played by Ann Miller, whose dancing I found mesmerizing. She thinks Ozzie is a perfect example of “primitive man,” and wants to study him. The song and dance routine in the Museum of Natural History treats anthropology as the study of “ooga booga” stuff, which is potentially offensive in these more enlightened times, but I found it all tongue-in-cheek enough to be entertaining.

And finally, Gabey is overtaken by romantic infatuation when he falls in love with a girl named Ivy Smith (Vera-Ellen). She is “Miss Turnstiles of the Month,” and Gabey assumes she’s the biggest celebrity in the city, since her face is plastered all over every subway car. (Incidentally, “Miss Turnstiles” is an obvious play on Miss Subways, which was a real program that featured women on New York City subways from 1941 to 1976. I looked at a bunch of the posters the last time I was at the New York City Transit Museum.)

On the Town is based on a Broadway play that premiered in 1944. The book and lyrics were by Betty Comden and Adolph Green, with music by Leonard Bernstein, based on an idea by Jerome Robbins. There’s a bit in the film that pays tribute to the original play, when Gene Kelly imagines his New York adventures set to music on stage, and it’s a wonderful moment that focuses solely on choreography.

On the Town is an exuberant romp that had me smiling from beginning to end. I can’t remember the last time I enjoyed a movie so unreservedly.