I haven’t seen all the movies Katharine Hepburn and Spencer Tracy made together, but of the ones I have seen, Adam’s Rib is easily my favorite. It’s hard to imagine a better vehicle for their talents.

In Adam’s Rib they play a married couple, Adam and Amanda Bonner, who are both lawyers. The Bonners have a loving marriage, but they’re both prickly and opinionated, and when they end up in the same courtroom on opposing sides of an attempted murder case, their quietly simmering battle of the sexes becomes a full-blown war. (Tracy and Hepburn were a couple in real life, but they were never married. Tracy was separated from his wife, but his Catholic faith precluded a divorce.) 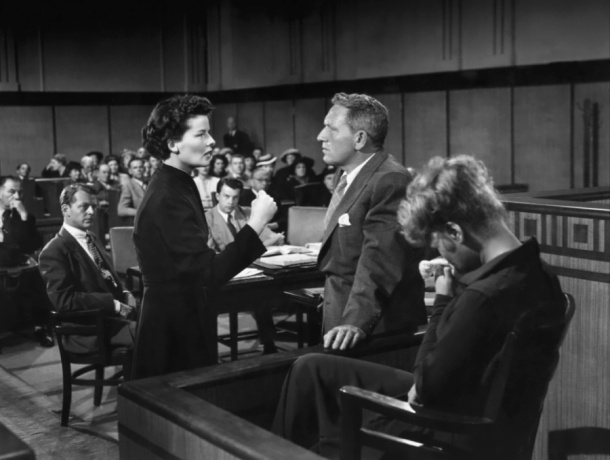 The director of Adam’s Rib, George Cukor, directed one of my favorite films from 1947, A Double Life. He is probably most famous for directing The Philadelphia Story (1940), which starred Katharine Hepburn, Cary Grant, and James Stewart.

Adam’s Rib was written by the same husband-and-wife team who wrote the screenplay for A Double Life, Garson Kanin and Ruth Gordon. (Ruth Gordon also acted, and had memorable turns as an older actress in Rosemary’s Baby and Harold and Maude.)

I loved A Double Life, but it’s a dark psychological drama about murder and madness, and couldn’t be more different from Adam’s Rib, which is an effervescent comedy, so it was fun to see the same writers and director making an equally good film about a completely different subject.

Adam’s Rib is not just a yuk-fest. While I laughed a lot, its take on gender relations is thought-provoking stuff; not only because it’s so different from most other Hollywood movies of the time, but because so much of it is still relevant.

Society may be less forgiving of male infidelity nowadays, but double standards are still rife. There’s a great scene early in the film in which Amanda Bonner asks her secretary, Grace (Eve March), why infidelity is “not nice” if it’s a man stepping out but “something terrible” if a woman does it.

Her secretary shrugs and says, “I don’t make the rules.” Hepburn responds, “Sure you do, we all do.”

The acknowledgement that we are all complicit in creating standards of “male” and “female” behavior is rare in motion pictures today, and was even rarer mid-century.

I also loved all the subtle bits in the film, like when a shot of the exterior of the courthouse implies that Amanda Bonner’s client may not — as a woman — get a fair trial.

The woman in question is Doris Attinger (Judy Holliday), a ditzy simpleton who emptied a revolver in the general direction of her husband, Warren Attinger (Tom Ewell), and her husband’s mistress, Beryl Caighn (Jean Hagen). She wounded her husband, and is on trial for attempted murder.

Assistant District Attorney Adam Bonner pulls the case and prepares to prosecute Mrs. Attinger, but his wife, Amanda Bonner, begins to needle him about the specifics. When he decides he’s had enough and tells her he hates it when she gets “all cause-y,” it’s the last straw, and she offers her services as a defense attorney to Mrs. Attinger.

One thing I loved about the film was how well Tracy and Hepburn were able to convey their physical tenderness toward each other even when they were arguing. The Bonners are an extremely believable married couple, which is rare to see in the movies.

The supporting cast are all good, although David Wayne’s performance as the Bonners’ amorous across-the-hall neighbor was a little campy and over-the-top for my taste.

Still, this is a great film, and a truly funny and highly literate comedy. Adam’s Rib is a sure bet for my list of the best films of 1949.

The True Glory, which was released on August 27, 1945 in the United Kingdom and on October 4, 1945 in the United States, is the granddaddy of every World War II documentary you’ve ever seen on the History Channel. Introduced by the Supreme Commander of Allied Forces in Europe, Gen. Dwight D. Eisenhower, The True Glory tells the story of America and Great Britain’s war against Germany and Italy, starting with the D-Day invasions of June 6, 1944 and ending with V-E Day, May 8, 1945.

The documentary, which won an Academy Award, was pieced together from hundreds of different war photographers’ footage. Several directors worked on the film, but the most commonly credited are Carol Reed and Garson Kanin.

There is some narration, but the majority of the film is told through first-person accounts in voiceover. There are a myriad of British and American soldiers who tell their stories, but there are also the voices of a Parisian family, nurses, clerical staff, an African-American tank gunner, and a member of the French resistance. If you know your World War II history and keep your eyes peeled, you’ll recognize many prominent figures in the footage, including Gen. Eisenhower and Gen. George S. Patton.

Produced by the British Ministry of Information and the U.S. Office of War Information, The True Glory lacks a certain degree of perspective, coming so soon after the end of the war, and is primarily made to celebrate the accomplishments of the Allied forces, but that doesn’t change the fact that the footage is absolutely stunning, and occasionally horrific. The True Glory is a must-see for even the most casual of history buffs.