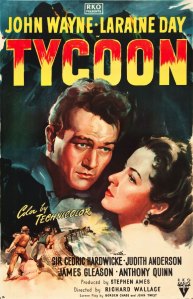 Munroe and his crew of wisecracking roughnecks are hired by a fussy British aristocrat named Frederic Alexander (played by Sir Cedric Hardwicke) — who for some reason has a sprawling estate in South America — to build a railroad tunnel through miles of solid rock.

Munroe thinks it would be smarter to just build a bridge over the mountain, but Alexander’s personal engineer Ricky (Anthony Quinn) wants a tunnel — and the stockholders agree with him — so that’s what the stockholders will get.

Munroe’s difficult job becomes even harder when he meets Alexander’s pretty daughter Maura (Laraine Day). Alexander is an overprotective single father who plans for his daughter to marry a suitable man and take her place in society, so when she falls for Munroe’s thuggish charms he’s horrified. He tells her that he understands that in pagan Rome young women of breeding amused themselves with gladiators, but he never thought she’d fall victim to such venal desires.

The romantic and domestic scenes in Tycoon are campy and poorly handled. The masculine realm is better handled, but not by much, and at more than two hours long, I found Tycoon a chore to get through.

John Wayne is one of the most famous movie stars of all time, but there’s a reason his most popular movies are westerns and war movies. He just wasn’t that good at playing romantic leads.

Tycoon was the most expensive movie to date from RKO Radio Pictures, but I doubt it caused Darryl F. Zanuck or any of the other big studio heads to look over their shoulders too much. The film’s $3.2 million budget didn’t touch spectacles like Cecil B. DeMille’s $5 million Unconquered (1947) or Zanuck’s $6 million Forever Amber (1947), but even taking into account the difference in budget, Tycoon can’t hold a candle to other big-budget flicks. The filmmakers originally planned to shoot at RKO’s Estudios Churubusco in Mexico, but shifted production to Hollywood at the last minute. Consequently, Tycoon just doesn’t look that good. All the backgrounds are matte paintings and the Incan ruins are obviously sets. There are a bunch of explosions and a big finale involving a race against time to stabilize a bridge against the onslaught of an overflowing river that involves some pretty hot miniatures and a stunt double who looks nothing like Wayne, but that’s about it in terms of excitement.