A Woman’s Secret is the third Nicholas Ray film I’ve reviewed on this blog, but it was the second film he directed.

Ray completed his first film, They Live by Night, in 1947, but RKO wasn’t sure how to market it. It premiered in the United Kingdom in a single theater on August 5, 1948.

The success of Ray’s third film, Knock on Any Door (1949), led to his first two films being released in the United States in 1949 by a newly confident RKO Radio Pictures.

Of his first three pictures, A Woman’s Secret is easily the weakest, and is significant mostly because it’s how Ray met his second wife, actress Gloria Grahame.

After shooting wrapped, the two were married in Las Vegas on June 1, 1948. It was the second marriage for both of them. (They had to live in Nevada for the required six weeks before Grahame could get her quickie divorce from actor Stanley Clements). Before they divorced in 1952, Grahame starred in one of Ray’s greatest films, In a Lonely Place (1950), which also starred Humphrey Bogart.

A Woman’s Secret was a contract job for Ray. The screenplay was adapted from Austrian writer Vicki Baum’s 1946 novel Verpfändetes Leben (Mortgage on Life) by the film’s producer, Herman J. Mankiewicz. Ray had no script input, so it’s easy to write it off as a studio-imposed footnote in Ray’s career. 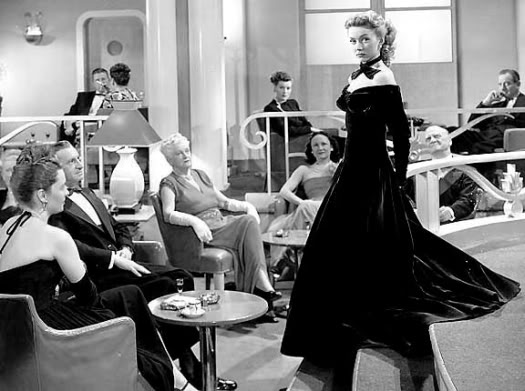 A Woman’s Secret is a “women’s picture” wrapped in a mystery. It’s no In a Lonely Place, but it’s worth watching at least once.

The central relationship in the film is the one between Marian Washburn (Maureen O’Hara) and her protégé, Susan Caldwell (Gloria Grahame). Marian is a singer who has lost her voice, and she’s completely shaped and guided Susan’s career, rechristening her “Estrellita.” One night, after the two argue bitterly, a shot rings out. Susan lies on the floor near death, a bullet lodged near her heart. Marian is holding the smoking gun, but this is a mystery picture, so don’t assume anything yet.

Most of the film’s plot unspools as a series of flashbacks as Susan lies in the hospital and the detective assigned to the case — Inspector Fowler (Jay C. Flippen) — tries to piece together the facts. He spends a good deal of time with composer and pianist Luke Jordan (Melvyn Douglas), who is Marian’s boyfriend. Fowler also gets plenty of help from his wife, Mrs. Fowler (Mary Philips), who’s running an investigation of her own.

There are a lot of interesting things going on in A Woman’s Secret, but nothing really jells. The film is too crowded with plot and characters for the central relationship between Marian and Susan to ever be fully explored. Melvyn Douglas and Jay C. Flippen are fine performers, and both inject their two-dimensional characters with enough life to make their scenes interesting. Philips gets a juicy role as Inspector Fowler’s wife, and her nosiness isn’t just played for laughs. She actually knows what she’s doing, much to her husband’s chagrin.

Most people who write about Ray’s career either gloss over or completely ignore this film. There’s not much about it that fits in with his obsessions and themes. But despite a studio-imposed script, there are interesting themes and tensions bubbling below the surface. Grahame’s role as Susan/Estrellita in particular feels at home in Ray’s oeuvre. She’s a misunderstood, inarticulate, unhappy, and tragic outsider — a character type that would recur again and again in Ray’s films. 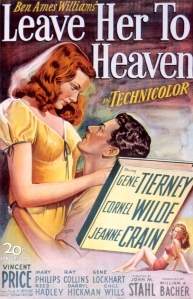 Can there be such a thing as a film noir in color? I don’t think there can, but the term noir has been so widely used, popularized, and bastardized that director John M. Stahl’s Technicolor adaptation of Ben Ames Williams’s novel Leave Her to Heaven, made during the heyday of noir in Hollywood, is often referred to as a rare instance of a film noir in color.

A year after she starred as the eponymous Laura (Otto Preminger’s 1944 classic that is also frequently referred to as a noir even though it really has very few characteristics of one, aside from being filmed in black and white), Gene Tierney created a memorably unhinged character named Ellen Berent.

When we first meet Ellen, the first thing we see is her beauty. Sitting across from novelist Richard Harland (Cornel Wilde) in the lounge car of a train, surrounded by green walls, her dark hair and pale face offset by her bright red lips, she looks like a porcelain doll come to life. Quickly, however, we notice something else. The way she is staring at him is predatory. The way she doesn’t speak for a long time after he answers a question is strange. She is beautiful, but there is something wrong with her. We can guess, however, that his relationship with Ellen won’t have a happy ending.

If only Richard saw what the audience can see. Of course, the audience also has the advantage of a framing device. In the first scene of Leave Her to Heaven, we see Richard return to Deer Lake, Maine. His friends and neighbors look at him strangely. As they whisper among themselves, we learn that he has just gotten out of prison after a two-year stint, but we don’t know what the charge was.

Most of the story is told in flashback. Beginning with the scene on the train, we see how Richard fell into Ellen’s clutches. After they disembark, they find that they are both guests at Rancho Jacinto, in New Mexico, where Ellen has gone to scatter her father’s ashes. After telling Richard several times how much he looks like her father (even though a framed photograph of the man looks nothing like Cornel Wilde), the scene in which the stone-faced Tierney rides a horse and scatters her father’s ashes in the mountains is one of the most striking in the picture. When Richard agrees to marry her soon after, it is at her urging. Marrying her is something he thinks he wants, but the words “Will you marry me” never escape his lips. He is caught in her web.

After their marriage, Ellen and Richard go away to his cabin in Maine. She resents the intrusion of anyone else into their lives, such as her sister Ruth (Jeanne Crain) or Richard’s younger brother Danny (Darryl Hickman), who is recovering from polio, and her resentment has deadly consequences.

Ellen is devious, but it’s not always clear how conscious she is of her own cunning. Although the other characters speak of how unnaturally close she was to her father, and how she loves with a childish ferocity that can be dangerous, the viewer is not privy to any deeper psychological insights. There are no scenes of her childhood or flashbacks to any trauma that might have precipitated her madness. It’s refreshing to have a character with sociopathic tendencies that have no pat explanation, but some insight into the jealousy that drives her might have helped flesh out the character.

So what is it that makes Leave Her to Heaven a film noir? The classification is a slippery one, and has become popular enough that nearly every black and white film from the ’40s that is not a musical or a comedy has been called a film noir at some point. In one of the first treatises on the subject, the 1955 book Panorama du film noir américain 1941–1953, French film critics Raymond Borde and Etienne Chaumeton identified the five main facets of film noir. They said that it is “oneiric, strange, erotic, ambivalent, and cruel.” Over the years, the term film noir has grown to encompass certain stylistic elements as well. Stark black and white cinematography and unbalanced constructions that grew out of German Expressionism are both hallmarks of noir, as is a pervading sense of doom.

So does Leave Her to Heaven contain any of these elements? It certainly could be called “strange,” but it’s not particularly dreamlike. It’s not very erotic, either, since Ellen seems to capture Richard in a web that is more psychological than it is sexual. Her actions are sometimes cruel, but the picture as a whole is not terribly ambivalent. Ellen may arouse feelings of both pity and hatred in the viewer, but she is still presented in a straightforward way. She has no crises of conscience or confusion about what she wants. And the lush Technicolor cinematography really pushes Leave Her to Heaven out of the noir category.

Leave Her to Heaven is a melodrama with a couple of shocking scenes, a sociopathic main character, and a courtroom denouement that drags down the pacing of the picture, but which does feature an enjoyable performance by Vincent Price as one of Ellen’s old flames who is now a prosecutor. It is not a film noir, unless we can divorce style from content. The absence of black and white cinematography and a real sense of doom (or a truly unhappy ending) means that Leave Her to Heaven just doesn’t qualify as a film noir. Of course, this shouldn’t stop anyone from seeing it. Whatever its genre, it’s an effective film with an interesting performance by a beautiful actress who didn’t exhibit a great deal of range in any of her roles, but who is chilling in this one.

Leave Her to Heaven was Twentieth Century-Fox’s highest grossing picture of the 1940s. Tierney was nominated for an Academy Award for best actress, and Leon Shamroy won an Oscar for best cinematography in the color category.